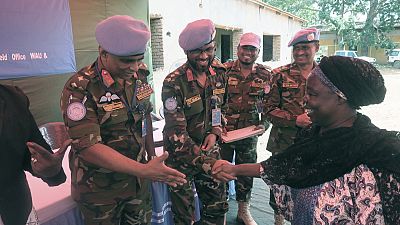 Calestina Juuku Alfred, who works as a cashier in Wau’s Ministry of Gender and Child Welfare, had never operated a computer, until recently.

‘’I didn’t know anything about a computer. I used commercial computer centres to type and print documents, which cost money. But now I can operate a computer easily on my own,’’ said Calestina on her graduation day, after acquiring a set of useful computer skills.

Now proficient in Microsoft Word and Excel programmes, Calestina can produce her ministry’s payslips and file the signed payslips electronically on her office computer.

Celestina is one of the fifteen government officials in the Wau area who benefitted from a training programme run by Bangladeshi peacekeepers serving with the UN Mission in South Sudan (UNMISS), acquiring basic computer operating skills.

Like Celestina, none of the graduates had prior ability to operate a computer, and most government offices and institutions in Wau still use old typewriters and store hard copies of official documents in box files.

‘’I was thinking that the Bangladeshi job is to protect the peace by guns. But today I am surprised that they have [computer] technical know-how,’’ said Simon Elia Wodi, a 56-year-old man who has worked in the Ministry of Education for more than four decades.

‘’They empowered us. We are now very rich in our minds. We’ve acquired technological knowledge for better pay and better living,” added an excited Simon, as he praised the Bangladeshi trainers’ ability to teach an old man like him new skills.

‘’Handling an adult is the most commendable technique the Bangladeshi trainers have!’’ he added.

The centre created by the Bangladeshi battalion is the only one providing free training to public servants in Wau.

‘’The computer has become one of the most important tools to ease people’s work all over the world. If you don’t have that knowledge, you are still backward,’’ said Mario Ubanga, Wau area Minister of Education.

He encouraged the graduates to make use of their knowledge to benefit the government institutions they serve in.

The head of the Bangladeshi battalion reiterated the peacekeepers’ commitment to help the people of South Sudan.

“We are trying to bring peace to your country [by] working with you,” said Brigadier Mohammed Jahangir Alam, head of the Bangladeshi battalion in South Sudan. “We are your brothers. We feel we have to do something for you. We were like you,” he said, referring to the state of his home country in the past. “We had nothing – no capacity, no infrastructure. We created our own and now we are standing on our two feet,’’ he told the graduates.

The computer training programme is just one of the different activities that Bangladeshi peacekeepers stationed in Wau have embarked on to empower the local people. In recent months, the peacekeepers treated hundreds of livestock to support livelihoods, and also extended free medical services to the neighbourhoods of Wau town where displaced people have been returning to after years in UN protection of civilian sites.