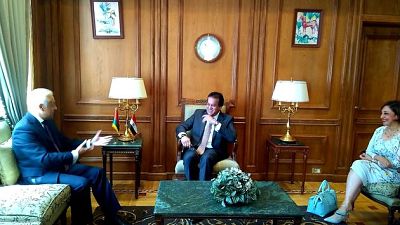 During the meeting, the sides discussed the state and prospects of Belarusian-Egyptian cooperation in higher education in the context of the results of the official visit of the President of Egypt to the Republic of Belarus in June 2019. Special attention was paid to deepening inter-university cooperation and enhancing student mobility, in particular by studying the students of the two countries in higher educational institutions of Belarus and Egypt by scholarships in such areas as engineering, agriculture, information technology, medicine and tourism.

The sides also considered developing and improving the bilateral legal framework of cooperation in higher education, including revision of previously signed MoUs by the universities of Belarus and Egypt and signing of an intergovernmental executive program on bilateral cooperation in the field of higher and postgraduate education.

The agreement to organize the visit of the Minister of Higher Education and Scientific Research of Egypt to the Republic of Belarus in the near future was reached.