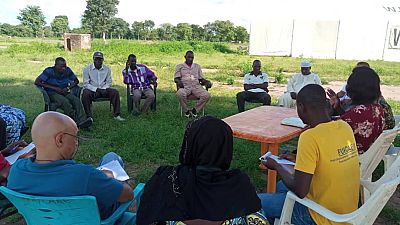 A robust flow of refugees and returnees from the Central African Republic to Chad has increased pressure on host communities, often leading to clashes over access to limited livelihood resources.

From March to July 2019, IOM Displacement Tracking Matrix (DTM) identified 69,343 returnees in the provinces of Logone Oriental and Moyen-Chari, in Southern Chad.

To address this issue, the International Organization for Migration (IOM) Chad – in conjunction with the Food and Agriculture Organization (FAO) – has implemented the Emergency Food and Livestock Crisis Response project (PURCAE II) which aims to increase social cohesion, peaceful co-habitation and intercommunity dialogue between refugees, returnees and host communities, through the development of Project Implementation Teams (PITs).

PITs are composed of seven to nine men and women volunteers from these communities, refugees and returnees. The team members are trained in project implementation, community mobilization, conflict management and resolution.

Once formed, PIT teams work within their local community, holding focus groups, community meetings and other platforms of exchange, to identify and inform on community assets related to agriculture and livestock activities to be rehabilitated, as well as identify community members who could benefit from cash-for-work activities.

This week, IOM organized the ninth project management and implementation training for community members which has led to the creation of the ninth PIT in Chad’s southern regions of Logone Orientale, Mandoul and Moyen-Chari.

Through the Project Implementation Teams, IOM adopts an innovative mechanism for community stabilization based on the participation of project beneficiaries and host communities. Community members are involved from the beginning in the development and implementation of humanitarian assistance activities, enabling them to take ownership of activities, a crucial element to ensure the sustainability of the assistance.

“Through this project, our goal is to strengthen the resilience of populations in Southern Chad through an innovative approach to project implementation which brings together beneficiaries and host communities,” explained Moussa Soro, Project Manager at IOM Chad.

The project focuses on activities that will improve social cohesion and dialogue between communities, enhancing purchasing power of the most vulnerable households, rehabilitating productive assets to build resilience and increasing household management capacities.

Since the beginning of the project, 71 individuals have been trained and nine PITs have been formed in the communities of Kobiteye, Danamadja, Nagkasse, Beraba, Kemdere, Doyaba, Maigama, Dilingala and Silambi, in Southern Chad. Cash-for-work activities have also been established in these communities. In the coming months, new PITs will be established and functional in the regions of Doba, Moissala, Sarh and Sido in addition to the commencement of the next cash-for-work rotations.

The 18-month project, beginning in early 2019, hopes to aid over 24,100 beneficiaries through cash-for-work rotations, trainings and infrastructure rehabilitation, made possible by The World Bank Group.