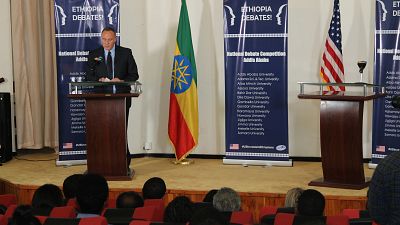 The U.S. Embassy in Addis Ababa celebrated the successful conclusion of the first Ethiopia Debates! Competition on August 21, 2019 in Addis Ababa. Ethiopia Debates! is a nationwide program that creates an interactive platform for university students to engage in a series of debate competitions, during which they learn public speaking skills, constructive dialogue, and debate techniques on a variety of cross-cutting issues. Debate club members had the opportunity develop debating skills through workshops and practical debates over the last twelve months.

In a formal debate, one of the main challenges for a debater is defending ideas they might not agree with. For this competition, 22 topics were proposed by the Center for Community Development (CeFCOD) and shared with the students and coaches prior to their arrival in Addis Ababa. While they had some time to research these topics, the was a random drawing for each round, so students did not know their topic and whether they would be arguing for or against the motion until just a few hours before their debate.

Topics covered a range of local issues, including: should public service be mandatory; is large-scale agriculture the best method to achieve food security; should students be able to choose their own university majors; does humanitarian assistance increase dependence from beneficiaries; should school be taught in local languages or a common language; and should individuals with large followings online be registered media?

At the closing ceremony, U.S. Ambassador Michael Raynor stated, “Debating is a microcosm of how we engage in a democracy.  By encouraging young leaders to discuss challenging public policy questions, we hope to nurture a new generation of civic-minded citizens and active members of the community who will lead the country where it wants to go.”

Ambassador Raynor added, “Communicating issues constructively, thinking critically, considering all sides of an issue, and remaining civically engaged will lead the country to a more inclusive, prosperous, and secure future.”

The National Debate Club is implemented by the Centre for Community Development (CefCoD), an Ethiopian Resident Charity Organization.