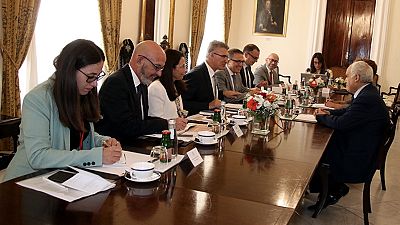 “We are ready to be of service to the United Nations and to the people of Libya”. This was stated by Minister for Foreign Affairs and Trade Promotion Carmelo Abela during a press conference held with Ghassan Salamé, Special Representative of the Secretary-General and Head of the United Nations Support Mission in Libya following bilateral talks were held today at the Ministry in Valetta. Minister Abela stated that the situation in Libya has been untenable for far too long.

Minister Abela re-iterated Malta’s continuous support to the UN-facilitated process in Libya led by Ghassan Salamé. He said that Malta believes that this is a situation that the European Union needs to discuss and that the Foreign Affairs Ministry will continue to push this item on the agenda of the Foreign Affairs Council.

Minister Abela emphasized that the international community must act in sync and in support of the United Nation’s Mission in Libya with the aim to ensure a successful political transition, and to work collectively for the benefit of the Libyan people. It is also imperative to keep on our radar the impending threat of terrorism, that afflicts both the Libyan people as well as the entire region, and therefore renders international action all the more pivotal and imminent. “We are against military solutions and actually there is no military solution for Libya. We have to go to the discussion table and find a political solution for the well-being people of Libya, first and foremost”, remarked Minister Abela.

During the bilateral talks the Minister mentioned the need for an enforcement mechanism at an international level to ensure the effective implementation and monitoring of the existent arms embargo, as well as the urgent need for all parties to agree to a durable ceasefire that would set the basis for a national reconciliation process. “The international actors supplying Libyan stakeholders with weapons should act responsibly, and adhere to and sustain the arms embargo in place”, noted Minister Abela.

The Minister went on to say that Malta stands ready to assist UNSMIL in the continued advancing of the Libyan cause, while stating that Libya will continue to remain a top foreign policy priority for Malta. The Maltese Ambassador to Libya has presented his credentials in February of this year, after which he led a Maltese delegation to Tripoli.