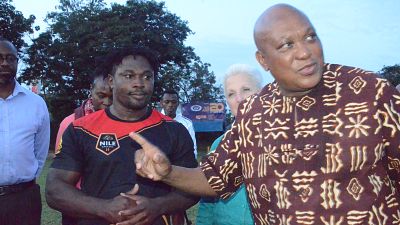 The leadership of the team remains the same with Asuman Mugerwa as the Captain and Justin Kimono as Vice Captain.

“You are 2 matches away. Never rest and think you have made it and have won. It is the beginning and it shows that it's do-able but you need to work harder and really reflect on the blind spot you picked from the previous match.”- H.E Lekoa Solly Mollo.

“The heart and what's in your head are the most important tools that any sports team can have. You will be challenged, you will have difficulties, you will be tired some day you will not feel like it but it's very important to remember what you are playing for and that you have support right behind you.”- U.S Ambassador Deborah Malac.

“We believe and trust in you as a team. Go make us proud in Zimbabwe”- Dr Edward Rukwaro.

The team is a mixture of youth and experience and are out to put their campaign back on track after their recent win at home against Zambia.(38-22)