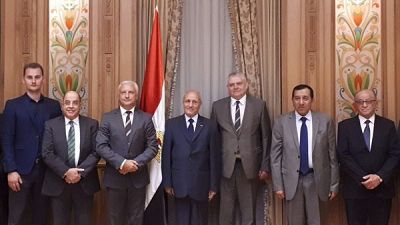 The meeting was attended by Eng. Viktor Osnovsky, Director General of «Amkodor» holding, the leadership of the National Organization for Military Production and its subordinate enterprises, the management of ECARD company, as well as «Amkodor» holding officers.

The Sides examined in detail issues of creating a joint production line of «Amkodor» road construction equipment in Egypt. The strategy of promotion and marketing of «Amkodor» equipment in Egypt was discussed in order to ensure regular loading of the production line and creating conditions for accelerated localization. Prospects of joint participation in exhibitions were considered.

A set of priority steps necessary to increase sales and develop the joint production line has been determined. An agreement has been reached on the formation of a joint working group to monitor implementation of this project.

Separately the Sides considered a possibility of supplying components and spare parts manufactured at the enterprises of the Ministry of Military Production of Egypt for the needs of «Amkodor» holding.

During the meeting a License Agreement and an Additional Agreement were signed with a time schedule for localization of «Amkodor» equipment production in Egypt.

Earlier on August 20, 2019 Director General of «Amkodor» holding visited «ETP» company, where he got acquainted with the production potential of the enterprise and held substantial negotiations with the leadership of the mentioned Egyptian company.