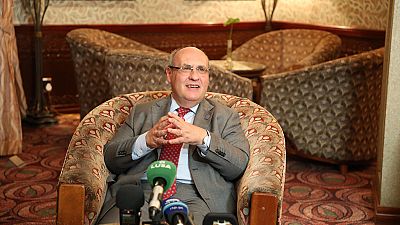 IOM Director General António Vitorino is currently on a two-day visit to Mozambique to assess and support the humanitarian response after the country was devastated by two catastrophic storms earlier this year. Cyclone Idai (March) and Cyclone Kenneth (April) affected 1.8 million people and caused hundreds of deaths.

Several months later, 500,000 people continue to live in destroyed or damaged homes and over 77,000 now live in new resettlement sites.

Today (20/08) in Beira, Sofala Province – one of the areas heavily affected by Cyclone Idai – DG Vitorino will meet with the Governor of Sofala Province, Alberto Mondlane and the Mayor of Beira City, Daviz Simango.

DG Vitorino is also scheduled to visit Mandruzi, a resettlement site for displaced families, accompanied by representatives of the Ministry of Foreign Affairs.

“There is still a lot to do, and urgent humanitarian needs to be met, in the reconstruction of the lives of people affected by Cyclones Idai and Kenneth, especially in regard to food, shelter and livelihoods,” said DG Vitorino.

“IOM is committed to supporting the people of Mozambique, and to work together with Mozambican authorities and humanitarian partners in the recovery process following these disasters.”

“We thank the Government of Mozambique for their collaboration and for taking the lead in the emergency response to Cyclones Idai and Kenneth,” said IOM Chief of Mission Katharina Schnoering. “We salute the courage of the affected populations who are, step-by-step, rebuilding their homes, livelihoods and communities.”

Since March 2019, IOM has assisted over 280,000 cyclone affected persons with critical shelter materials and relief supplies. IOM is co-leading the Shelter Cluster with IFRC and is the lead of the CCCM Cluster working in close partnership with the Government of Mozambique’s National Institute for Disaster Management, IOM’s core government partner.

IOM is providing support to most vulnerable population through the provision of shelter and distribution of NFIs, Camp Coordination and Camp Management, Provision of Health and Protection services and Mental Health and Psychosocial support in both regions.