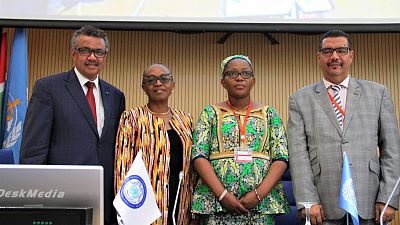 The 47 Member States of the World Health Organization’s (WHO) African Region nominated Dr Matshidiso Moeti to serve a second five-year term as Regional Director for Africa.

The nomination took place today during the 69th session of the WHO Regional Committee for Africa, which is the governing mechanism involving health ministers from all Member States. Dr Moeti’s candidacy was endorsed by the African Union Executive Council earlier this year.

Her nomination will be ratified by the 146th WHO Executive Board at its January 2020 session. If ratified, her second term will begin 1 March 2020.

“I am very honoured to be nominated for a second term as Regional Director for Africa,” said Dr Moeti. “During the past five years, I have worked to transform the WHO Secretariat so that we better respond to the health needs of millions of Africans. This nomination is an endorsement of the many achievements we have reached together with health ministries. I intend for us to scale more mountains together over the next five years.”

During her first term, Africa made significant advances in health. When Dr Moeti was elected in 2015, the region was in the throes of the West African Ebola outbreak. Through the concerted efforts of WHO, governments and partners, the three affected countries – Guinea, Liberia and Sierra Leone – ended the outbreak by December of that year. A WHO Health Emergencies Programme was launched in 2016. In 2018, WHO and partners supported emergency responses to more than 160 public health events in more than 40 countries.

“The WHO Secretariat is now better organized, resourced and equipped to support Member States to detect and rapidly respond to epidemics and ensure health security in the region,” said Dr Moeti.

The regional universal health coverage flagship programme was launched in 2017 to promote concrete country actions to ensure that everyone can access the care they need without financial hardship. By December 2018, 40 Member States had comprehensive national health policies and plans jointly assessed with partners and in line with national development plans.

In her acceptance remarks, Dr Moeti pledged her continued commitment to transforming the WHO Secretariat as it works with countries in tackling the health challenges facing the region. Dr Tedros Adhanom Ghebreyesus, WHO Director-General, congratulated Dr Moeti on her re-nomination.

“Dr Moeti has done an outstanding job over the past five years,” said WHO Director-General Dr Tedros Adhanom Ghebreyesus. “Under her leadership, the region is making very encouraging progress. Her nomination for another term demonstrates the confidence and the trust that the Member States have in her. It’s been an immense pleasure to work with her, and I look forward to our continued collaboration during her next term.”

If appointed by the Executive Board, Dr Moeti promised to work with Member States and partners to address health challenges within the global WHO Transformation framework and the Thirteenth General Programme of Work 2019–2023.

“My vision is of African people of all ages, all income levels and social groups, and in all places, enjoying good health and well-being, through accelerating towards universal health coverage, preventing and controlling outbreaks and emergencies, and creating environments that promote healthy lifestyles,” said Dr Moeti.

She is a public health veteran, with more than 35 years of national and international experience. She joined the WHO Regional Office for Africa in 1999, where she has served as Deputy Regional Director, Assistant Regional Director, Director of Noncommunicable Diseases, WHO Representative for Malawi, Coordinator of the Inter-Country Support Team for the South and East African countries and Regional Advisor for HIV/AIDs.

She is renowned for having led the WHO 3 by 5 Initiative in the African Region at the height of the AIDS epidemic, resulting in a significant increase in access to antiretroviral drugs by people living with HIV.