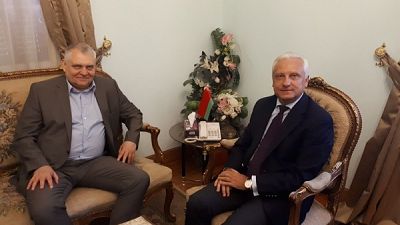 On August 19, 2019 Ambassador Extraordinary and Plenipotentiary of the Republic of Belarus to the Arab Republic of Egypt Dr. Sergei Rachkov met with Eng. Viktor Osnovsky, Director General of «Amkodor» holding who is currently visiting Egypt.

During the meeting current and perspective issues of promoting road-building and agricultural machinery of «Amkodor» holding in Egypt and other regional markets were discussed in detail.

Issues of developing the joint production of «Amkodor» equipment at «ETP» company of the Ministry of Military Production of Egypt, raising the level of localization and expanding opportunities for marketing and sales of the equipment were comprehensively considered.

Topics of establishing joint ventures and appointing «Amkodor» holding representative in Egypt, as well as entering the markets of African countries jointly with the Egyptian Side were touched upon.

During the visit meetings of Eng. Viktor Osnovsky, Director General of «Amkodor» holding with the Minister of State for Military Production Maj.-Gen. Dr. Mohamed al-Assar, as well as the leadership of several public and private companies in Egypt are also planned. Signing of bilateral documents is expected.