National Mourning Day observed with due solemnity in Nigeria 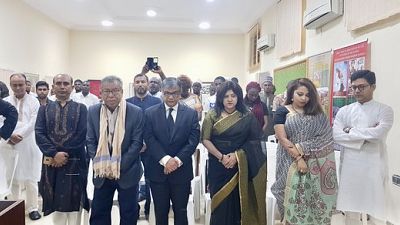 Bangladesh High Commission in Abuja, Nigeria observed the National Mourning Day with due respect & solemnity on 15 August, 2019, marking 44th martyrdom of the Father of the Nation Bangabandhu Sheikh Mujibur Rahman.

Solemn observance started with the hoisting of the national flag at half-mast at the Chancery at 9.30 am by Mr. Md. Shameem Ahsan, ndc, High Commissioner of Bangladesh to Nigeria.

On the same day, recitation from the holy Quran (Quran Khani) was held from 3-6 pm at the Chancery for the salvation of the departed souls of Bangabandhu Sheikh Mujibur Rahman & other martyrs of the family. In the evening, a discussion-cum-special prayer was held at the Auditorium. At the outset, the High Commissioner accompanied by his wife, Officers/Officials of the Mission & members of the community placed floral wreath on the portrait of the Father of the Nation. One minute silence was observed as a mark of respect for the Father of the Nation and other martyrs of 15 August, 1975. A documentary on the glorious life of the Father of the Nation was screened. This followed reading out of the messages of the President, Prime Minister, Foreign Minister and State Minister for Foreign Affairs on this occasion. In the discussion meeting, the speakers touched on the glorious life and achievements of the Father of the Nation. They urged all to work together to build a prosperous Bangladesh under the dynamic leadership of the Prime Minister Sheikh Hasina to realise the dream of Bangabandhu for a Sonar Bangla (Golden Bengal). Mr. Leonard Oru, a senior Nigerian journalist who visited Bangladesh recently under Visit Bangladesh Programme, also spoke and paid tribute to the Father of the Nation.

In his remarks, the High Commissioner paid glowing tribute to Bangabandhu and highlighted on his active involvement throughout his life for just causes of Bangalees. In this regard, he urged the expatriate Bangladesh nationals to work unitedly for the implementation of Vision 2021 & Vision 2041 under the leadership of the Prime Minister Sheikh Hasina.

Members of Bangladesh community, Nigerian guests including business leaders and members of the civil society, officials from High Commission, among others, were present along with families. A special prayer was offered for the salvation of the departed souls of Bangabandhu Sheikh Mujibur Rahman, other martyrs of the family and for the prosperity of the country. The guests were served with refreshments.

Distributed by APO Group on behalf of Ministry of Foreign Affairs of Bangladesh.
Media files