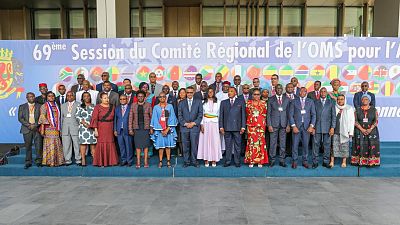 The Congolese leader drew attention to ongoing health development initiatives in his country.

“Each meeting of the WHO Regional Committee for Africa should better highlight decisions and facilitate the consideration of African health issues by bodies such as the Executive Board and the World Health Assembly, said President Denis Sassou-Nguesso. “The endeavours of African States should be complemented by the global momentum for health for all. This is one of the best bets for humanity.”

In his opening remarks, WHO Director-General Dr Tedros Ghebreyesus highlighted that many countries have made impressive progress in delivering essential health services at the district level, yet large gaps remain. Only one third of people in the 47 WHO Member States can access essential health services, and only one third can do so without fear of financial hardship.

“Strengthening primary health care must therefore be the number one priority for every country,” he said. “The best investment in primary health care is in human capital. Nurses, midwives and community health workers are especially important for delivering the services that can promote health and prevent people from needing a hospital.”

In welcoming the participants, the WHO Regional Director for Africa, Dr Matshidiso Moeti, highlighted progress made by countries: Access to HIV services has expanded significantly, with the number of people on antiretroviral therapy having more than doubled in the past six years. The region is recording some of the fastest declines globally in new cases of tuberculosis and is on the verge of polio eradication. The Regional Director noted that political will is needed to tackle the emerging burden of noncommunicable diseases, which are expected to account for an additional 28 million deaths in Africa in the coming decade.

“All the health priorities and challenges I have mentioned coincide with an opportunity – that the day for universal health coverage has finally come. If governments, partners, WHO and other United Nations agencies combine our forces towards UHC we will be able to make health for all a reality for people in our region,” said Dr Moeti.

She called for a minute of silence in honour of health workers who have lost their lives while on the job. She remarked that in the face of complex challenges, the Member States are better prepared to respond to emergencies but must overcome huge funding gaps in implementing national action plans for health security. She commended the DR Congo Government for demonstrating sound leadership and ownership of the response to the Ebola outbreak, in coordination with partners.

Among the issues on the agenda of the five-day meeting is the Regional Strategy for Integrated Disease Surveillance and Response which if implemented, will improve preparedness and response to disease outbreaks. Delegates will also discuss the strategic plan to reduce the double burden of malnutrition in the WHO African Region. The strategy provides guidance to countries to stem the tide of rising malnutrition, obesity and diet-related noncommunicable diseases by 2025. The Health Ministers will also discuss how to bring vector-borne diseases under control and how to strengthen district health systems for achieving universal health coverage. They will also the nominate the next Regional Director, who will serve a five-year term.

The Regional Committee is the highest decision-making body on health in the region, involving ministers of health from the Member States of the WHO African Region. It meets once a year to review critical health issues affecting the continent and to advise on appropriate strategies to improve health outcomes.