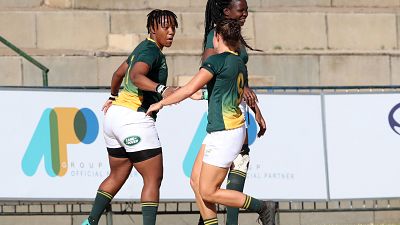 On Saturday, the Springbok Women played against the Lionesses during the 2019 Rugby Africa (www.RugbyAfrique.com) Women's Cup, a qualifier for the 2021 Women's Rugby World Cup. In an enthralling game, South Africa defeated Kenya 39-0.

The Springbok Women got off to a flying start as they grabbed two early tries through Zintle Mpupha and Lindelwa Gwala which unsettled the Lionesses.

Tayla Kinsey recorded two conversions to make it 14-0 to the hosts before she scored her first try to extend South Africa's lead.

The momentum was with the Springbok Women and they scored their fourth try through Snenhlanhla Shozi after a good move by South Africa, who were deservedly leading 24-0 at the interval.

The Lionesses were pinned back in their own half for long periods in the second-half, but the East Africans produced a determined defensive display to hold the hosts.

However, Stanley Raubenheimer's charges piled pressure on Kenya and they did score their fifth try through Aseza Hele to extend South Africa's lead.

Mathrin Simmers and Rights Mkhari then sealed South Africa's 39-0 victory over Kenya with late tries as the Springbok Women qualify for the Women's World Cup for the fourth time.

South Africa head coach Stanley Raubenheimer expressed his delight after guiding his side to the 2021 Women's Rugby World Cup finals.

“Look, I am just happy we qualified. Now the hard work starts from here onwards. There are a lot of mistakes that we need to work on, but I am just delighted after qualifying,” he said.

“We have to go out there and represent Africa with pride. So, that is something that we will think about in the next two years and plan for what we want to do there.”

Kenya head coach Felix Oloo admitted that South Africa were the better side on the day and he is pleased with how his charges performed in the tournament.

“Yes, definitely, the players gained a lot of experience from participating in this tournament. They played their hearts out. We will try to improve in the next two years.”

South Africa finished at the top of the group after three rounds of matches and the Springbok Women were crowned champions of the 2019 Rugby Africa Women's Cup, and they have also qualified for the Women's Rugby World Cup to be held in New Zealand in 2021.