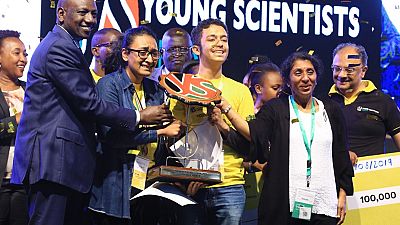 The competition is closely modelled on the Irish BT Young Scientists and Technology Exhibition and was introduced to Kenya by the Embassy of Ireland in partnership with the Government of Kenya.

This year some 460 students produced 220 innovative science projects to compete for the top prize, which includes a trip to Ireland to participate in the BT-Young Scientist and Technology Exhibition in January 2020 and full scholarships, courtesy of Strathmore University.

President Kenyatta, who is the Patron of Young Scientists Kenya (YSK) met with the bright young scientists showcasing their innovative projects during the opening ceremony. Some intriguing projects included a motorbike helmet that prevents drunk driving, water recycling prototypes, a high-tech traffic control system, a study on gender stereotyping as a predictor of poor performance in science, and development of technology for unbreakable dams.

After seeing a selection of projects, President Kenyatta directed state agencies to secure intellectual property rights for the young innovators and instructed the Kenya Intellectual Property Rights Office to offer free patents to viable innovations generated during the YSK exhibition.

A striking aspect of this year’s awards was the large number of girls winning prizes across the categories; particularly in the Chemistry, Physics and Maths category which saw girls win the first, second and third prizes.

The overall runners up were Sophia Ndunge and Brenda Nkatta from Daraja Academy in Laikipia County, an arid part of Kenya, who had never before travelled to Nairobi. Their project – a Home Made Lift Pump – was motivated by the risks faced by women and girls when going to fetch water in their local rivers which are populated by crocodiles and hippos. The pump is made from wood, flip flops and waste pipe materials that are readily available and affordable in rural areas and much less expensive to repair than the government-provided water pumps which frequently break down.

The exhibition was the culmination of efforts by the Ministry of Education and the Embassy of Ireland in Kenya to roll out the Young Scientists Kenya (YSK) programme to schools in all 47 counties of Kenya in 2019. In total over the past year, some 47,000 secondary school students were introduced to YSK and took part in experiments and mentoring to boost interest in Science, Technology, Engineering and Mathematics (STEM) subjects. The best science projects from across the country were selected to compete in the exhibition.

Over the last three years, Irish Aid, via the Irish Embassy in Kenya, has been financially and technically supporting this public private partnership with the Government of Kenya, the private sector and academia to drive interest in STEM subjects so that Kenyan students develop capabilities to be able to compete in a new information-based and highly technological global society. Additional financial support has come from Safaricom, Concern Worldwide, Trócaire, Self Help Africa and the Institute of Physics for Ireland and the UK.

A panel of experts from diverse backgrounds including Google, the Institute of Physics, local universities and professional bodies were selected to judge all submissions and noted the very high quality of projects on display. Some of the competing students had to overcome lack of resources and facilities that would be considered basic in Irish schools and come from a diverse range of schools including the arid regions of Kenya, urban settlements and from special needs schools.

Winners across a number of categories received prizes for their innovations and were celebrated by hundreds of invited guests and dignitaries representing the Government, industry, civil society and academia. In her address at the Awards Ceremony, Ambassador Fionnuala Quinlan commended the hard work, brilliance and compassion of the young scientists and thanked the teachers for supporting their students and the judges for their difficult task in selecting winners.

The Embassy will now work closely with the YSK team and Government to support all of the winners to advance their projects either through further research or links to industry for all commercially viable ideas. This includes a YSK Business Bootcamp which will take place in December for all of the 2019 winners through which they will receive dedicated mentorship and training.

Distributed by APO Group on behalf of Department of Foreign Affairs and Trade Ireland.
Media files