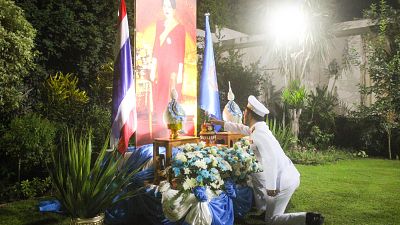 On 12 August 2019, Royal Thai Embassy in Cairo organized a felicitation ceremony in honour of the Occasion of the Birthday Anniversary Her Majesty Queen Sirikit The Queen Mother at the Ambassador’s Residence which around 50 Thai citizens participated. On this occasion, the participants lit up the candles to express well wishing to Her Majesty and signed congratulatory book on Her Majesty’s Birthday Anniversary. The ceremony was well proceeded and participants were delighted to present their royalty on this occasion.

Besides the above ceremony, the Embassy and Thai Student Association in Cairo under the Royal Patronage jointly organized the Mother’s Day 2019 under the theme “My Mom My Queen” on 9 August 2019 at Saleh Kamel Center for Islamic Economics in Al Azhar University. The event drew great attention from over 400 Thai Muslim students to participate in the activity which they paid a visit to the exhibition of Her Majesty’s royal duties and student’s activity on the said occasion.