Ministry of Health and Partners Commit to Improving the Quality of Care for Reproductive, Maternal, Neonatal, Child, and Adolescent Health Services in Uganda 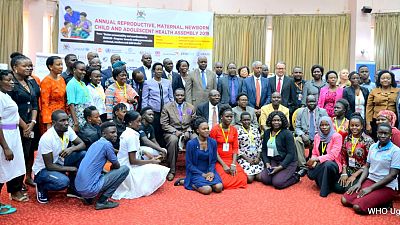 The Ministry of Health (MoH) convened the Third Annual National Assembly on Reproductive, Maternal, Neonatal, Child and Adolescent Health (RMNCAH) Services where government and partners committed to scaling up RMNCAH services to reach the most vulnerable populations.

Held under the theme- ‘Better accountability and coordination for RMNCAH – progress towards ending preventable maternal, perinatal and child deaths’, the assembly was aimed at strengthening coordination and accountability for effective and efficient implementation of RMNCAH policies and program interventions at the national, regional, district and community levels.

During the assembly, delegates committed to reducing RMNCAH related deaths and morbidities with a focus on reducing facility-based Maternal and Newborn deaths. They also emphasized the need to revise staffing norms, focusing on increasing midwives, anaesthetists and doctors in Health Centre IVs and monitor staff attendance.

Regarding equitable provision of services, the delegates underscored the need to establish adolescent responsive services at both facility and community level in liaison with other relevant players such as Civil Society Organizations (CSOs) and schools. Furthermore, they also pledged to strengthen Male Involvement programs for RMNCAH, HIV and Gender-Based Violence.

The assembly also called for increased and optimized use of health-sector financing through an increased national budget to the health sector including the wage bill, fast-tracking of the enactment and implementation of the National Health Insurance Scheme (NHIS) and expansion of Results-Based Financing. In the same spirit, government and donors were also implored to increase domestic resources for RMNCAH interventions and use the nationally agreed mechanisms for accountability and tracking of results of the investment case for RMNCAH.

The Minister of Health, Honourable Dr Jane Ruth Aceng presided over the assembly representing the First Lady as Guest of Honour and informed the delegates that the current Health Sector Development Plan (HSDP 2015/16-2019/20) prioritizes RMNCAH interventions to achieve a productive and healthy human capital for wealth creation. “When the status of maternal, newborn, infant and child health is good, the Health Sector is then considered as performing well,” she said.

A multi-sectoral approach geared towards promoting maternal and child health and nutrition, early childhood care and development, as well as a positive environment for adolescent development and health, was also advocated for. In addition, a commitment to strengthen the existing community structure for health promotion, service provision and referral linkages was also made.

The World Health Organization (WHO) Representative in Uganda, Dr Yonas Tegegn Woldemariam called for more commitment to adolescent health, noting that during this stage, individuals face environmental influences which can lead to health-risk behaviours and poor related outcomes. “These include alcohol or tobacco use, physical inactivity, intimate relationships coupled with unprotected sex, unintended pregnancies, injuries and exposure to violence which can jeopardize their health,” he said.

He added, “This period is marked with several behaviour patterns and changes which, if not well attended to, can lead to long-lasting negative consequences on the health and well-being of adolescents.”

The assembly was attended by different players in the health sector including officials from the Ministry of Health, all District Health Officers in Uganda, development partners including the United Nations Family, Civil Society Organizations, Academia and the media who are key partners in promoting health in the general public.