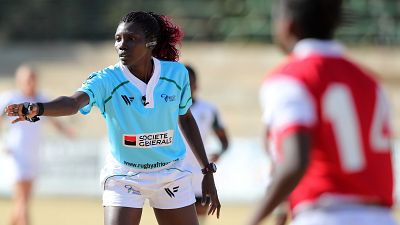 On Tuesday, the Springbok Women played against the Makis during the 2019 Rugby Africa Women's Cup (www.RugbyAfrique.com), a qualifier for the 2021 Women's Rugby World Cup. In an enthralling game, South Africa beat Madagascar 73-0.

South Africa got off to the perfect start as they grabbed three quick tries through Eloise Webb and Rights Mkhari (brace) within the first 15 minutes.

The tries unsettled Madagascar as they were pinned back in their own half for long periods and they conceded more tries.

The score was 44-0 to South Africa at the interval following a first-half which was dominated by the Springbok Women – scoring eight tries.

The Springbok Women continued where they left off in the first-half as Zintle Mpupha scored her first try before Malinga and Hele grabbed their braces to make it 63-0.

Aphiwe Ngwevu put her name on the scoresheet with two tries to extend the tournament hosts' lead.

Madagascar searched for a late consolation try, but South Africa held on to win 73-0 on the day.

South Africa captain Babalwa Latsha believes there's still room for improvement despite their impressive win, but she is confident they will overcome Kenya in their final match and qualify for the Women's World Cup.

“We put in a good performance, but it could have been better. There are some areas that we have identified that we believe we should work on. Overall, the performance was good today,” she said.

“The ultimate goal is to qualify for the Women's World Cup. We have faith in our system and preparations. We are ready. We are confident that we will put in a good performance on Saturday.”

Madagascar coach Ravoavahy Lanto Nirina was satisfied with how his troops performed and he is keen to guide the Makis to victory over Uganda in their final game.

“We lost the game, but we played until the last minute. We are pleased with how we played. Uganda conceded 89 points against South Africa and we conceded 73 points against the hosts,” he said.

“We have to win our last game against Uganda. That is why I substituted my key players after the restart in order to keep them fresh for our last match of the tournament.”

The next games are scheduled to take place on Saturday, August 17 in Johannesburg with South Africa facing Kenya, while Madagascar are set to take on Uganda.