Rugby - Kenya Lionesses: One Match Away From The 2021 Women’s Rugby World Cup 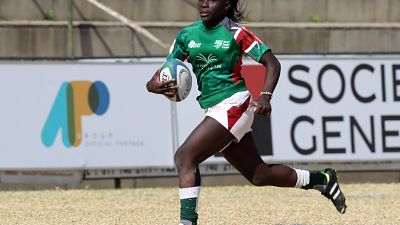 The Kenya Lionesses are now one match away from their biggest tournament participation in history, the 2021 Rugby Women’s World Cup taking place in New Zealand, after they beat the Uganda Lady Cranes 37-5 in the second Qualifier match.

Grace Adhiambo split the posts halfway into the first half of the encounter handing her side a 3-0 lead that they held on to the breather. The Ladies were unsettled in the first half, a performance they improved on in the second half for them to register 34 points to their name and concede five.

Flanker Naomi Amuguni who was making her debut for the National team cut through the Lady Cranes defense, off loading to Janet Okello to land the first try in the match. Adhiambo’s conversion drifted wide for a 8-0 lead. Five minutes later, a sleek dummy by Adhiambo was bought by the Lady Cranes who created enough space for her to slice through. The Ugandan full back was ready to tackle Adhiambo but to her left side was Okello who’s support came in handy as she landed her brace with Adhiambo’s conversion splitting the posts.

An infringement by the Lionesses presented a opportunity for the Lady Cranes to drill in three points but the ball drifted left missing the posts. Scores remaining 15-00. The Lionesses were very lethal with the ball in hand in this half as they made their way to the opponent’s try line for the fifth time. Okello who had the ball generously passed it to Staycy Atieno who landed her maiden try in the Qualifiers. Adhiambo’s boot not having the best of days missed the conversion for a 20-00 score.

With 20 minutes left on the clock, the lady Cranes landed a corner post try reducing the deficit to 20-5 after the conversion was short.

Grace Adhiambo registered her name twice on the score sheet this time for her two tries that she landed scored in quick succession at the corner. The first one she spotted a gap in Uganda’s defense and she cut through it to go over the whitewash while the second try originated from a classic interplay between Philadelphia Olando and Celestine Masinde on one side of the pitch. The Lionesses then spread the ball wide to find Grace who dived over the try line.

Sheila Chajira sealed the match with a center post try with Janet Owino adding the twos for a 37-5 full time score.

The Lionesses now prepare for the last and most crucial match of the Qualifiers; they meet South Africa on Saturday 17th August at 4:00pm. The outcome of this encounter shall determine who qualifies directly for the World Cup and who heads to the repechage.