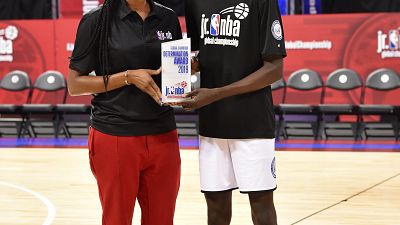 The global youth basketball tournament took place from Aug. 6-11 and featured 32 of the top 13- and 14-year-old boys and girls teams from around the world. Overall, 15,000 players from 75 countries participated across Jr. NBA Global Championship regional competitions.

The Central girls team, from Kansas City, Mo., finished the week with a 7-0 record, marking the second consecutive year that the Central Region won the Jr. NBA Global Championship. The team, which defeated the Midwest, Mid-Atlantic and West to advance to the Global Championship final, was led by returning champion S’mya Nichols and guards Chloe Clardy, Jada Williams and Kiara Smith, who scored a combined 43 points (https://on.NBA.com/31wb9gb) in the win over Canada.

The West boys team, from Los Angeles, went 2-1 in pool play before winning three straight games in bracket play, including victories over the Northwest, Central and the previously undefeated Southeast, to advance to the Global Championship final. West guard Tyler Rolison recorded a team-high 21 points and 12 rebounds, and Quinton Webb, Issac Martinez and Taj DeGourville combined for 39 points (https://on.NBA.com/2YHrTnB) in today’s win over Africa.

Prior to the championship games, seven-time NBA All-Star and 2018 Naismith Memorial Basketball Hall of Fame inductee Grant Hill hosted an awards ceremony and was joined by Silver and other presenters including Wade, Cash, Utah Jazz guard and 2018-19 NBA Sportsmanship and Twyman–Stokes Teammate of the Year Award recipient Mike Conley, Miami Heat forward Udonis Haslem and former Orlando Magic player Nick Anderson. Four awards representing the Jr. NBA’s four core values – Determination, Respect, Teamwork and Community – were each presented to the boy and girl players who best exemplified the associated characteristics throughout the tournament. The winners were:

Recognizes the players who consistently dedicated the time and energy and showed the work ethic needed to excel as people and players. These winners were supportive of teammates, demonstrated a willingness to learn, exhibited strong leadership skills and always hustled on the court.

Recognizes the players who respected all teammates, coaches, opponents and officials. These players were considerate, had a positive attitude and demonstrated great sportsmanship.

Recognizes the players who exhibited strong communication and cooperation skills. These players understood how to listen, lead and work well with others.

Recognizes the players who are committed to giving back to those in need. These players understood the impact of the game beyond the court and embraced the opportunity to make a difference in the community.

During the weeklong event, all 32 teams participated in activities designed to reinforce the Jr. NBA’s core values and provide the players with development opportunities and memorable experiences, including health and wellness programming, leadership development and NBA Cares community service projects.