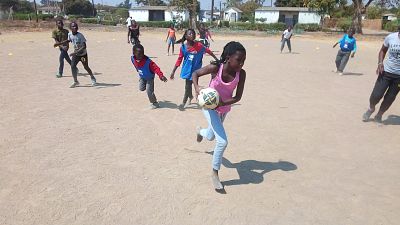 The Bhubesi Pride Foundation has concluded a successful 2019 tour of Kabwe in Zambia. The coaches who arrived in the former mining town on Sunday 4th August hit the ground running by conducting an orientation tour of participating schools in the company of Local Organizer (who is also Get Into Rugby Zambia Manager) Tom Chaloba.

Close to 400 girls and boys attended training sessions from Monday to Thursday in various locations across town. However, the numbers were trimmed to 250 (representing 125 girls and 125 boys) drawn from the five (5) participating schools.

Speaking after the event which was hosted at Don Bosco Centre on Friday 09th August, 2019, Bhubesi Pride Foundation Team Leader Sofia Domingos said, “It has been an awesome week working with these kids (aged between 09 to 15 years old), they are so confident, jovial and easy to work with. It goes to show that alot of planning and preparations have been done prior to our arrival by the local Coaches from the DieHardRugby Academy, with whom we have worked since 2016”.

Meanwhile, Tom Chaloba paid tribute to the visiting and local Coaches for their passion and hard work despite having to conduct sessions in the midday August sun.

“We are in a hurry to develop rugby in Zambia and we are happy to collaborate with like-minded Individuals and Organisations. It is gratifying to see the increased interest from the female (former and current) players from Green Eagles Rugby willing to put in their time and effort in ensuring the sustainable growth and development of the game” he concluded.

The Bhubesi Pride Team has since left Kabwe for Lusaka before proceeding to Malawi for their assignment in Lilongwe.