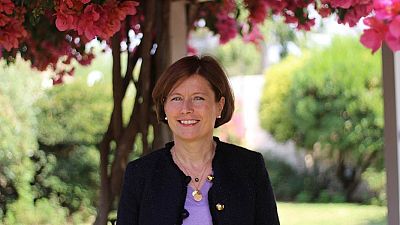 “I am very honored to have been appointed Ambassador of France to Botswana and Special Representative to SADC. My career as a diplomat has taken me to several continents and oceans; from Latin America to Asia, including the Indian Ocean and Australia. My wish was now to come to work on the African continent to witness with my own eyes its dynamism and growth, and discover the richness of its cultures and people. I could not dream of a better place than Botswana, a country worldly famous for its strong democratic commitment and respect for Human Rights, but also for its biodiversity and wonderful landscapes.”

“I am looking forward to meeting all our partners and local authorities, as well as my colleagues of the diplomatic corps and all members of the French community, to work together and deepen the bilateral relations between France and Botswana. These relations are already excellent thanks to the achievements of my predecessors and the great team of the French Embassy in Gaborone. I would also like to thank the people of Botswana for the very warm welcome they have given me since my arrival.”

Mrs Beau graduated from the Paris Institute of Political Studies and holds a Masters of English Language, Culture and Economics from Sorbonne University. In 2005, she was an auditor at the Diplomatic Institute in Paris.

She was named Knight of the National Order of Merit in 2016.


Distributed by APO Group on behalf of Embassy of France in Gaborone, Botswana.
Media files

Download logo
Mrs Laurence Beau took up her appointment as French Ambassador to the Republic of Botswana, and Special Representative to SADC in August 2019