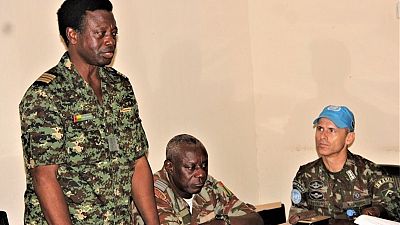 Around 15 military press officers participated in the exercise, acquiring new skills allowing them to deal with the media, give individual and collective interviews, draft statements and manage information in crisis situations. They also learned how to maintain a presence on social media platforms to broadcast messages in a transparent and ethical manner.

The training was requested by the Chief of Defense Staff, General Biague Nantan, to improve the technical capacity of his personnel and enhance their ability to communicate both internally and externally, bringing the military closer to the civil society.

“Nothing can improve more the image and professionalism of the Guinea-Bissau armed forces than positive strategic communication” said the General, handing over a gift of appreciation to Colonel Botelho, UNIOGBIS’ Senior Military Adviser.

The activity is part of UNIOGBIS mandate to strengthen democratic institutions and enhance the capacity of state organs to function effectively and constitutionally.