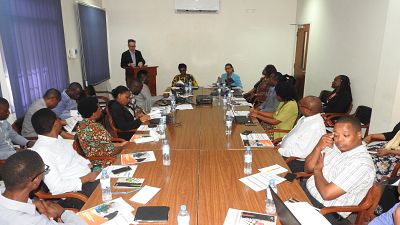 Tanzania, like many other countries, has risen to the occasion to address viral hepatitis with the country having a costed Viral Hepatitis National Strategic Plan (2018 – 2023) as well as draft guidelines in preparation for the introduction and scaling up of viral hepatitis diagnosis and treatment services. However, data on viral hepatitis is limited. To that effect, the Ministry of Health, Community Development, Gender, Elderly and Children with technical and financial support from WHO conducted a Viral Hepatitis National Strategic Information Workshop review existing data systems and put forward recommendations on how to improve strategic information for viral hepatitis in Tanzania.

In response to this global public health problem, in 2010, the World Health Assembly (WHA) adopted resolution WHA63.18 on viral hepatitis, urging Member States to recognize and address the issue of viral hepatitis through improved prevention and control efforts. This was followed in May 2016, with endorsement by the WHA of the Global Health Sector Strategy (2016-2021) that proposes to eliminate viral hepatitis as a public health threat by 2030.

The WHO Representative in Tanzania Dr T Ketsela in her opening remarks gave a brief overview of the global picture on viral hepatitis B and C and emphasized the importance of data and setting baselines as these are essential to monitor progress towards achieving the elimination of hepatitis by 2030. Dr J Mghamba the Assistant Director, Epidemiology and Disease Control officially opened the workshop. She indicated that the country was committed to the elimination agenda and information and evidence was required by the government to prioritize the interventions for viral hepatitis B and C given the scarcity of resources.

During the mission and the workshop, the existing data systems were assessed in view of the information that is required to generate data to monitor the ten core global indicators. Utilizing methods proposed in the WHO consolidated strategic information guidelines of 2017; the best sources of information possible to estimate the baseline value of the core indicators were selected. Lastly, gaps in the data systems were reviewed with stakeholders to the workshop and recommendations (immediate, medium and long term) were put forward on how to improve strategic information for viral hepatitis in Tanzania.

The following major recommendations were put forward for consideration by the MOH:

WHO will continue working closely with the MOH, Tanzania, partners, civil societies and communities as the country moves towards elimination of viral hepatitis by 2030.