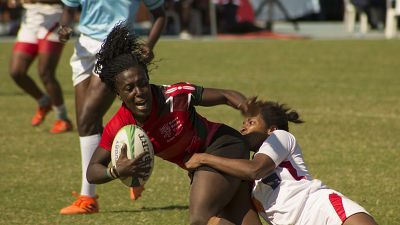 The first opportunity for a team to qualify for Women’s Rugby World Cup 2021 through the regional qualification route will take place at the Rugby Africa Women’s Cup in Johannesburg, South Africa, from 9-17 August, 2019.

All games will be live streamed via: https://livestream.com/baruchmedia/WomensRuby

Regional tournaments will be hosted in Oceania, Europe, Asia, Africa and South America with the final opportunity for teams to qualify being through the new repechage tournament, which will be held in 2020.

A brand-new competition, the Rugby Africa Women’s Cup will be held at the Bosman Stadium in Johannesburg on 9, 13 and 17 August, with the first matchday of the tournament marking National Women’s Day in South Africa.

The competition will see hosts South Africa, Kenya, Madagascar and Uganda play three games each in a round-robin format where the winner will directly qualify for Women’s Rugby World Cup 2021.

Women’s international rugby has a new team with Madagascar set to enter the test arena in Johannesburg as they’ll make their play their test match debut against Kenya on day one.

Hosted in New Zealand, Women’s Rugby World Cup 2021 will be the first time that the women’s tournament has been held in the southern hemisphere. After winning the 2017 event in Ireland, New Zealand will be looking to defend the title on home soil.

Promotion to the Asia Rugby Women’s Championship also keeps their dream of appearing at Women’s Rugby World Cup 2021 alive as the winner of that tournament will qualify for the game’s flagship event in New Zealand.

“Introducing these regional tournaments into the qualification pathway for Women’s Rugby World Cup 2021 increases the level of competition in the women’s game and allows us to engage more fans in the game worldwide.”

World Rugby is dedicated to growing the women’s game and recently launched a new ‘Women in Rugby’ brand identity and global campaign ‘Try and Stop Us’, aimed at driving increased participation and engagement among fans, audiences, players and investors in the women’s game.

Women’s rugby is one of sport’s great success stories, experiencing unprecedented growth around the world. Participation levels are at an all-time high with 2.7 million players globally – making up more than a quarter of the global playing population – and a 28 per cent increase in registered players since 2017.

All games will be live streamed via: https://livestream.com/baruchmedia/WomensRuby

Stay up to date on social media by following @RugbyAfrique