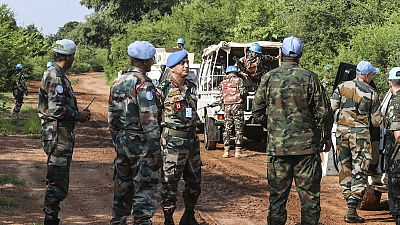 It’s only a 155-kilometer drive from the capital of South Sudan to Yei.

But the journey can be a treacherous one.

The main supply route between Juba and the Central Equatorias has been significantly upgraded by peacekeeping engineers serving with the United Nations Mission in South Sudan. But heavy downpours cause chaos during the rainy season, washing out parts of the road and creating deep muddy crevices that vehicles are forced to carefully navigate to avoid getting bogged down.

A bigger threat is the recent surge in ambushes and the killing of civilian commuters by armed groups. The remnants of the attacks litter the roadside, including vehicles that have been looted and torched. In one spot, only the metal sign from the back of a Toyota landcruiser remains resting in a pile of ashes as evidence of the crime committed.

The local governor describes the attacks as “barbaric” and is calling for an end to the violence which is threatening fragile peace in the area.

“Let them heed the call of peace, particularly the protection of the civilian population who are very vulnerable and just going about their lives earning a living,” says Yei Governor, Emmanuel Anthony Adil. “I think this is the lowest thing an organization can do, which is to us an act of cowardice, because usually a movement that has an objective will not target civilians.”

The UNMISS Force Commander is leading a peacekeeping patrol from Juba to Yei to undertake a security assessment. He stops along the way to hear first-hand from communities about the threats they face and to gain an understanding of what the Mission can do to help deter violence.

“I find that this is a land that is blessed by nature. It is bountiful with a tremendous amount of potential for growth and development but sadly, because of the conflict, people still continue to be miserable,” says UNMISS Force Commander, Lieutenant General Shailesh Tinaikar.

“The positive thing is that people are coming back. We see gradual movement back into the villages although a large number of villages still have many houses unoccupied. Over a period of time, we hope that we are able to build a secure environment that encourages people to come back to this beautiful land to get on with their regular work and to rebuild their lives.”

The local commissioner estimates that 7000 refugees have recently returned from neighbouring Democratic Republic of Congo and Uganda. Many have come home to find their farms and tukuls looted or destroyed and are being forced to live with relatives or to rely on humanitarian aid for survival.

“We are receiving people back all the time,” says Lainya Commissioner, Stephen Steward. “We are urging government partners, international and local humanitarian organizations to come and assess the situation and to bring support because this is a very critical time.”

“We need people to feel the peace that has been signed and to return. But they also need support, particularly in the area of education where there are a lot of challenges,” he says.

While there has been a significant reduction in political violence across South Sudan since the signing of a peace deal last September, sporadic clashes have continued in the areas around Yei, causing continuing suffering for the local population.

“We need peace to prevail, especially as we women are the ones suffering, carrying children, cooking for children. We have no schools for children,” says Lainya Women’s Association Representative, Joyce Kiden.  “We are hurting, all because of war.”

A series of rapprochements have taken place to encourage reconciliation and peacebuilding, including many supported by UNMISS. The local governor says he is committed to working collectively with other parties to restore hope so that civilians feel safe and can go about their business in towns and villages across the region.

The Force Commander says UNMISS will do its best to support the peace process.

“We are confident that in the future days, peace will come, progress will happen,” says Lieutenant General Shailesh Tinaikar. “It is the demand of the people and UNMISS completely supports this demand. We will do everything that is possible to ensure that we provide a safe, secure environment for people to return and for peace to come.”

If lasting peace can be secured, the people of this region will finally get the opportunity they deserve to rebuild their lives and reclaim their reputation as the once-prosperous breadbasket of South Sudan