Indian peacekeepers give Malakal vet hospital a facelift (by Gagan) 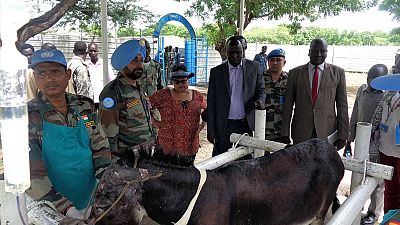 A vandalized veterinary hospital in Malakal has been given a comprehensive makeover by Indian peacekeepers serving with the United Nations Mission in South Sudan.

Local farmers had approached peacekeepers asking for support because of the dire shortage of veterinary services in the Upper Nile region.

“Now our animals will not die of sickness,” said livestock owner, Monytok Chol.

Animals provide a significant source of food and wealth in the South Sudan. The restoration of the veterinary facility, which had been badly damaged and abandoned when civil war erupted in December 2013, is an economic lifeline for livestock keepers in the area, who have been experiencing severe deprivation.

A farmer with a herd of almost 100 goats was beaming with delight as he attended the formal opening of the new vet hospital.

“I have been waiting for this moment for a long time,” said Nyawan Deng.

Handing over the keys to the renovated facility to the local governor, the Head of UNMISS’ Malakal Field Office, Hazel said the new hospital will, not only, improve veterinary services but also promote peaceful co-existence between farmers and displaced families from different ethnic groups who returning to the area. Shared access to one community facility to support their combined livelihood activities will help bring people together, she said.

Governor Peter Chol Wal said the government was committed to protecting the welfare of livestock in the area given their economic importance. The rehabilitation of animal health care facilities by the Indian peacekeepers would go a long way towards preventing sickness and death among local livestock, he said.

“The greatness of a nation can be judged by the way its animals are treated,” said the Governor, quoting inspirational Indian social activist and political campaigner, Mahatma Gandhi.

The Indian peacekeepers say they will continue to support the local community by training animal health workers and strengthening veterinary infrastructure.

“The training of community animal health workers will ensure the accessibility of veterinary services to livestock in far-flung areas,” said Colonel Amit Gupta, commander of the Indian battalion.

“The renovation of Malakal Veterinary Hospital and rebuilding of state veterinary capability will also inspire the locals and internally displaced people to return and resume their livestock farming activity to enhance their self-sufficiency.”