Hijrah Talk: A New Dialogue around Migration in the Middle East and North Africa 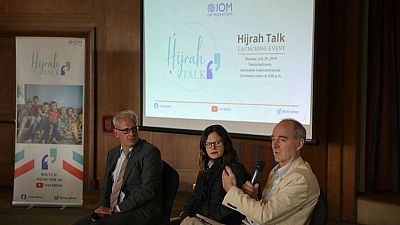 “Hijrah Talk”, a talk show using digital platforms to challenge misconceptions around migration, was launched on 29 July by IOM’s Regional Office for the Middle East and North Africa (MENA).

The production aims to spread fact-based dialogue around migration across 22 Arab countries and throughout the Mediterranean region. The format consists mainly of short video interviews with experts answering questions that address popular myths surrounding migration. The goal is to help unpack some of these views, thus better understand a more realistic view of migration.

The bi-lingual name – “Hijrah”, in Arabic (for Migration), plus “Talk” – encourages both English and Arabic speakers to watch and interact.

“We’re facing today a critical issue of trust. People are certainly less interested in the usual institutional messages,” said Leonard Doyle, IOM Head Media and Communications Division and Spokesperson. “Trust with the audience is built when we start speaking their language, reflecting their concerns, and balancing the dialogue to bring together misconceptions and facts, misinformation and information,” he added.

“By providing the public with easy access to data pertaining to the scale, scope, and socioeconomic context of migration trends, especially on a regional scale and with a gender balanced approach, Hijrah Talk will help create a medium to demystify some of the misconceptions around migration,” said Senior Regional Liaison and Policy Officer Kristina Mejo. “This talk show was founded with the objective of bridging the gap between the populist discourse and migration research,” she added.

IOM MENA’s regional media and public information strategy focuses on public perceptions and discourse around migration in the region.

Regional Media and Public Information Officer for MENA Farah Abdul Sater explained how “in MENA, adults who live in countries with the highest unemployment rates show the most negative attitudes towards migration to their countries. While in Gulf Cooperation Council (GCC) countries, which have high percentages of temporary migrant workers, among nationals and Arab expatriates interviewed, a relatively small percentage of people want migration levels to decrease and a high share want levels to increase or stay the same.”

“Understanding such nuances between countries is important to balance the dialogue. However, optimizing existing positive discourse entry points is even more important,” added Abdul Sater. “For example, younger people globally are more likely to have an opinion about migration. They are more likely to favor increasing immigration levels. Hijrah Talk’s digital format and simple language is tailored to engage more young adults in MENA.”

Hijrah Talk premiered on the regional office’s social media pages, including YouTube. The choice of the video format responds to global audience preferences, and the decrease of individual attention span. Six episodes will air between July and October, and each episode will be translated to Arabic, thus allowing local audiences to comment and interact.

As IOM, “Our role is not to preach to the usual public of supporters,” said Laurent de Boeck, IOM Egypt Chief of Mission. “It is rather to bring the right information to the misinformed public, and to create a constructive dialogue about migration. That’s the power of Hijrah Talk.”