Coming home to Nimule is a bittersweet experience for one refugee 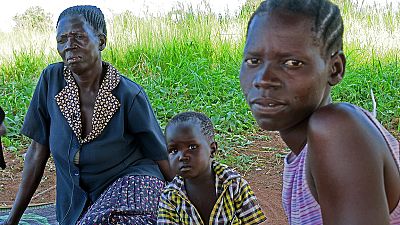 After three difficult years living in a refugee camp in Uganda, Rachele Mindraa has made the decision to return to her native village of Anzara in the Eastern Equatorian region of South Sudan.

Sitting under a tamarind tree in her ancestral homeland of Nimule, Rachele described the challenges she faced in the camp.

“My family and I fled to Uganda during the 2016 conflict. Life there was very hard. Food rations for refugees were not enough, so we decided to come back to our homeland and try to survive,” she said.

Local returnees like Rachele continue to steadily make their way home from Palabek and Adjumani refugee camps in northern Uganda, but many of them lack the resources needed to restart their lives.

A few of them have been lucky enough to end up with relatives on farms with opportunities to make a living. Rachele, however, has not been as fortunate.

“I am a widow, I am old. Most women are unable to support their families through farm work. I don’t have money for food or for my daughter’s school fees. As a result, she has had to drop out of secondary school,” Rachele said.

“I wake up at dawn and walk to the forest to collect firewood to sell. That money buys us our daily meals from the market.”

Approximately 2.3 million South Sudanese fled to neighbouring countries as refugees when civil war erupted in 2013. Another 1.9 million are internally displaced.

Political violence across the country has reduced significantly since the signing of a revitalized peace agreement last September. As a result, approximately 500,000 people have decided it is safe, and time, to return to their homes – according to the International Organization for Migration (IOM). More than 210,000 of these people have returned from refugee camps.

It is not an easy journey, however, with many parts of the country still suffering immense economic deprivation, including a lack of food, water and access to basic services such as education and healthcare. The United Nations Mission in South Sudan is working with UNHCR and other humanitarian partners to provide support to assist those returning in line with international humanitarian principles.