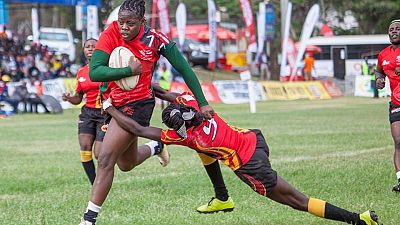 Sheila Chajira makes her comeback to the Kenya Lionesses squad that heads to South Africa for the Rugby World Cup Qualifiers in Johannesburg.

She picked up an ankle injury in April during the Hong Kong 7s where the sevens side fell to Brazil in the semifinals. Her experience in the big stage adds an advantage to the side and she also gives the management more options when it comes to the center-pairings. “I am very excited to be actively back in the set up. I have been attending the training sessions as I did my rehab and I strongly believe that we shall deliver,” said Chajira.

As part of their preparation for the tournament, the Lionesses participated in this year’s Elgon Cup fixtures and emerged victorious in both home and away matches over opponents and neighbors Uganda Lady Cranes with a 77-18 aggregate win.

Head Coach Felix Oloo has handed Vivian Akumu and Naomi Amuguni their maiden call ups to the National Team as they head to South Africa. The two ladies have earned the jersey during the training sessions. “We’ve been polishing up on the rusty areas we identified during the Elgon Cup and also ensuring each player understands their role in the team. We have an on-going camp and we’re confident that the selected team will make Kenya proud,” said Oloo.

The Lionesses will kick off their campaign against Madagascar on 9th August, 13th August will see The Lionesses face Uganda Lady Cranes for the third time this year before wrapping up the tournament against hosts South Africa on 17th.

Considering that there isn’t yet an established African ranking for women’s fifteen-a-side rugby, the four fifteens teams were chosen on the basis of the level and frequency of play of the female players. The winner of the tournament will qualify directly for the World Cup whilst the second best team will play a match against a selected team from South America and join the global repechage tournament if victorious.