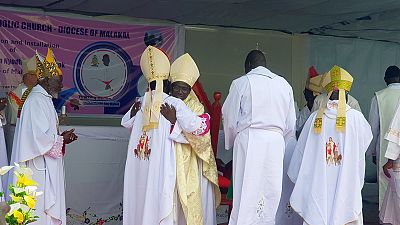 The sounds of nearly thirty thousand people rejoicing filled Malakal this Sunday as ordinary citizens and functionaries from across South Sudan gathered to bear witness to the consecration of a new bishop for the Upper Nile region.

Following a ten-year vacuum in the diocese’s leadership, Dr. Stephen Nyodho Ador Mijowk’s appointment ushered in a new era of hope and reconciliation for the residents of the greater area, and was welcomed with song, dance, and various gift-offerings such as goats and cows from communities residing in the town, as well as from residents of the United Nations protection site.

The celebration was the culmination of months of work and preparation, carried out by volunteers with the support of the Civil Affairs Division of the UN mission in South Sudan (UNMISS), including grading the terrain to withstand the rains.

Among the volunteers was Flora John, who brimmed with gratitude at the opportunity to leave her hometown of Juba to give a helping hand.

“I had heard of people travelling all the way from northern Jonglei in the rain for nine days, pushing through harsh conditions just to make the journey to Malakal on this occasion.  It’s mind-blowing to be here with my sisters and brothers, especially considering what little resources they have to accommodate us,” she said.

The diocese has had a strong presence throughout the history of Malakal. Under the oversight of Dr. Mijowk’s predecessor, the late Bishop Benson Mojowk Nyiker, education in the town flourished as new primary and secondary schools were built.  However, during the 2013 conflict, Malakal’s strategic position in the country’s oil-rich Upper Nile made it a target during fighting, forcing many to flee in search of a better life and turning it into a ghost town.

On that day, though, a new spirit of life burst forth from Malakal – one that breaks the silence of years of yearning for a lasting peace. But speakers at the event acknowledged that transforming this yearning into reality can only be achieved through collective effort.

“This country is ours and it is an obligation for all of us to take part in bringing about unity, reconciliation, and forgiveness among ourselves. This is a day for relationship restoration for the sake of generations to come,” Cardinal of South Sudan Gabriel Zubier Wako underscored.

As a speaker of the languages of the largest opposing ethnic groups in South Sudan, Dr. Mijowok serves as a living example that it is possible for contrasting elements to come together for the greater good. During this time when community members are still struggling to pick up the pieces of their lives years later, this message fills them with renewed optimism for greater social cohesion and reconciliation.

At the ceremony, the head of the peacekeeping mission’s Field Office in Malakal, Hazel Dewet, reiterated UNMISS’s readiness to help consolidate peace through facilitating the return of civilians displaced by the conflict to their place of origin.

South Sudan’s vice president Wani Igga emphasized the importance of community re-building and offered words of encouragement for a more resilient future to the crowds.

“Seeing you gathered in such large numbers today is a sign of peace, and I urge all of you to come back to your homes in Malakal and beyond for the sake of building our lives once more in the great resource-rich Upper Nile region,” he said.