Communities in the Unity area reconcile; pledge to end inter-communal conflicts together (by Jacob Ruai) 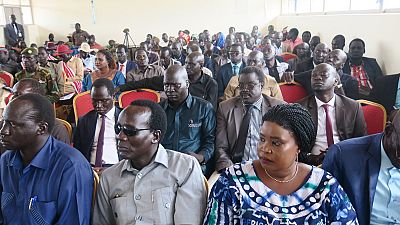 Government and opposition authorities in Northern Liech have agreed to form a joint force to improve security along major roads, following appeals from participants at a recently concluded peace dialogue.

At the peace forum, participants demanded an end to criminality in the Northern Liech area, especially the cattle raids that are driving intercommunal violence, seeking deployment of security forces along major roads and known criminal hotspots.

“There is no need for us to kill one another,” said Nyathuruon Mayiel, a women’s representative in Bentiu. “I want the state government and the opposition to work together to end all the issues raised at this conference. We want to live in peace and unity,” she said, appealing to political leaders to unite the people.

“We must unite our communities and we should work together to reconcile them,” he said. “Let us forgive one another for the betterment of our country,” he entreated, going further to urge action against criminality.

“Let us stop all criminal activities so that our people can live in peace,” said the paramount chief.

He called on the youth in the area to stop the culture of cattle raiding and revenge killings, which have plagued Koch and Rubkona counties, prompting the organizing of the peace forum.

Their appeals seem to have yielded positive results immediately, as government and opposition authorities in the area agreed to act during the discussions, co-chaired by the Governor of Northern Liech, Joseph Monytuil, and Sudan People’s Liberation Movement in Opposition military governor for the Liech area, General Tor Tunguar.

“We agreed to form a joint security force that has to be deployed in the areas with insecurity, like along the Bentiu-Nhialdiu and the Bentiu-Koch roads, because there has been insecurity since last year where some humanitarian workers were attacked by unknown criminals,” said General Tor Tunguar, the Liech area opposition governor.

“We thought it was important for us to call for this conference to discuss the rampant killings and cattle raiding in the state, which is a threat to the security of our people,” said his government counterpart, Joseph Monytuil.

“My government and our brothers from Sudan People’s Liberation Movement will work hand in hand to promote peace in our state,” said Governor Monytuil. “We want to create a good relationship between our communities and encourage them to work toward peaceful coexistence,” he underscored.

“All the resolutions passed in the meeting will be implemented, and I am requesting the chiefs to work with us in this process,” added the governor.