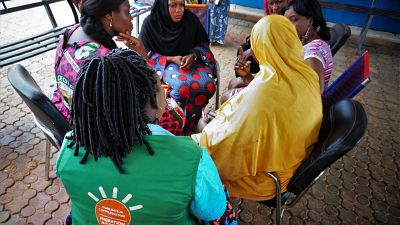 Risks, vulnerabilities and needs while embarking on a migration journey are strongly shaped by one’s gender. In 2018 alone, IOM assisted more than 20,000 migrants at its six transit centres in Niger, of whom close to 2,000 are female migrants, coming mostly from Niger (40%), Nigeria (21%), and Cameroon (15%).

To respond to the vulnerabilities of women on the move, IOM Niger employs nine female community mobilizers (MobComs) from different backgrounds and nationalities, to conduct sensitization sessions on irregular migration and its alternatives.

To further reinforce its gender-specific awareness-raising activities in Niger, IOM organized between 22 and 27 July, the workshop “Meeting of Women Working in Media and Female Artists” (REFEMAC), in partnership with local music label Art-Disc Records, and thanks to the support of the European Union, within the framework of the Migrant Resource and Response Mechanism.

With the theme “A Better Informed and a More Secure Migration for Women and Young Girls”, the workshop aimed to expose female artists and journalists to current migration trends for women, the dangers of irregular migration, and strategies for preventing the phenomenon and raising awareness.

“Irregular migration today, in its understanding by the general public, is an essentially male phenomenon,” said Abdourahamane Harouna Koudou, Coordinator for Art-Disc Records. “We strongly believe in the influence the participants have and the role they can play on empowering other women.”

The 20 participants chosen are all well-respected influencers and leaders in their respective fields, ranging from acting to journalism, and through the workshop, are all pledging to commit to raising awareness about irregular migration and its risks.

“Our messages become more credible when they are shared by people that have a certain notoriety beyond our organization,” said Stephanie Eeckman, IOM’s Community Outreach Officer in Niger. “If the participants are fully informed and engaged with the cause they are promoting, they can have a considerable impact on behavior change related to irregular migration.”

During the one-week workshop, IOM’s community mobilizers or “MobComs” facilitated various debates between the 20 participants and speakers on various migration-related topics. Last week, the 20 participants, along with IOM’s female MobComs, visited Bobiel 2, IOM’s transit centre for female migrants in Niamey, in order to talk to migrants about their experiences with migration along this route.

Aida is one of the migrants who spoke openly about her migration journey during Wednesday’s visit. She has been at IOM’s transit centre in Niamey for three weeks, as she waits to return to Burkina Faso, through the Assisted Voluntary Return and Reintegration (AVRR) programme, under the EU-IOM Joint Initiative for Migrant Protection and Reintegration.

“I left my country with a lot of hopes and dreams, but what I found abroad was only misery,” said Aida. “I had a hard time finding a job, and when I finally found one, I was never paid. I shared a room with eight other girls and could barely afford to eat. This was my life for seven years.”

Tifa, one of the artists participating in the workshop, recalls her own experience from earlier years when an acquaintance offered her a job in a beauty salon in Tunisia. “My mother convinced me not to go while all my friends were telling me I was crazy to let such an opportunity go,” says Tifa. “I now realize that this could have easily been me. There was someone there to open my eyes and I hope I can do the same for other people one day.”

“This initiative shows that awareness-raising in Niger is not only about making communities aware of the risks of irregular migration, but also about empowering community members and giving them a space to identify their own solutions,” said Barbara Rijks, IOM’s Chief of Mission in Niger. “We need to continue to encourage collective responsibility through strengthened community mobilization.”

Over the next few months, IOM’s team in Niger will continue to reinforce the team with the addition of more female MobComs to ensure that women and other vulnerable groups receive clear messages that can prevent them from falling prey to human trafficking networks, both within and outside Niger.