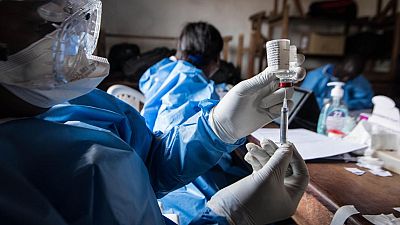 This week marks one year since the start of the 10th Ebola outbreak in the Democratic Republic of the Congo (DRC). Following the declaration of a Public Health Emergency of International Concern (PHEIC) on 17 July, the World Health Organization (WHO) in collaboration with the government of the DRC, other United Nations (UN) agencies, partners and communities, is working on further scaling up response and preparedness measures.

Since the first Ebola cases were confirmed in Mangina, in the North Kivu province of eastern DRC, on 1st August 2018, 175 000 people in the DRC and over 10 000 in neighbouring countries have been vaccinated against the Ebola virus. Fourteen treatment and transit centres have been set up and more than 140 000 contacts have been identified and monitored. Furthermore, 77 million people have been screened for Ebola at hundreds of screening points set up at official and unofficial crossing points along the DRC’s borders. In addition, tens of thousands of alerts have been received and investigated.

These responses have been achieved despite the difficult conditions in which WHO and partners are operating. Since the beginning of the outbreak, WHO’s response has continually evolved to adapt to the situation as it unfolds on the ground. Preparedness and vigilance are still key as WHO and partners redouble efforts as the outbreak enters its second year.

“I am immensely proud of the commitment and courage of everyone working in the field and what we have achieved together,” said Dr Matshidiso Moeti, WHO Regional Director for Africa, “We have learnt a lot of lessons during the past year. We learn from our own experience, and from discussions with our partners. We also engage communities, listen to what they have to say and adapt our approaches. This is the only way we will end this outbreak.”

Violence and insecurity have plagued this region of the DRC for two decades. A weak health system and humanitarian crisis, including internal displacement, as well as security issues have complicated the Ebola response. Safely accessing those in need and gaining acceptance by communities, some of whom are distrustful of outsiders after years of conflict, have been the major challenges in this response.

WHO continues to lead the public health response to the Ebola outbreak and is calling for a more united approach where under the leadership of the DRC government, the UN and other partners take greater responsibility for areas of the response in which they have expertise. WHO is also providing technical leadership in the areas of surveillance, vaccination and case management. WHO has mobilised and deployed more than 700 international experts -71% of whom are from the African region – as part of the surge capacity needed to respond to the outbreak.