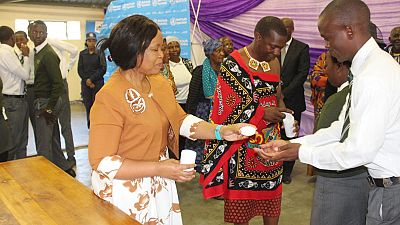 The Kingdom of Eswatini is getting closer to ending intestinal worms as a public health problem in line with the World Health Organization’s 2020 Roadmap on Neglected Tropical Diseases (NTDs). The country reached an impressive 98% of eligible school aged children with medicines for intestinal worms in the fourth round of Mass Medicine Administration (MMA) campaign conducted recently.

The campaign was conducted from 10 to 27 June 2019. The government of Eswatini, the World Health Organization through the Expanded Special Project for Elimination of Neglected Tropical Diseases, the International Center for AIDS Care and Treatment Programs (ICAP), Médecins Sans Frontières (MSF), Young Heroes and other development partners supported the campaign. Ministries of Health, Education and Training, Tinkhundla Administration and Development and the Deputy Prime Ministers Office worked together in the spirit of Intersectoral Action for Health (IAH).

Albendazole 400 mg was administered for Soil Transmitted Helminthiasis (STH). The campaign targeted 23 Tinkhundla (Districts) countrywide and with approximately 152 012 school aged children (Primary: 105036 and High: 46976) in 406 schools. A total of 148 868 children (Girls: 72547 and Boys: 76321) were covered during the campaign giving a national coverage of 98%, the highest so far compared to the 85% recorded during the third round in 2018. More than 7 539 teachers also took the tablets, which contributed towards high acceptance among the children. Unlike during previous campaigns, acceptance among private schools was also very high. Only 12 cases of minor side effects were reported during the campaign.

Minister of Health, Honourable Lizzie Nkosi officially launched the campaign in the presence of the WHO Country Representative for Eswatini, Dr Cornelia Atsyor. The event was held at Mlumati High School in the Northern Hhohho region. During the launch, the minister reported that the coverage has been increasing since the reintroduction of the campaign in 2016. She said that the increase in coverage was a clear indication that the Kingdom is united in combating Neglected Tropical Diseases (NTDs) towards meeting the 2020 targets.

“Such efforts have not gone unnoticed in the African region as in February 2019, Eswatini was recognized as the leading country in the fight against NTDs in Africa, and this was announced during the African Union meeting in Addis Ababa, Ethiopia,” the Minister said. She added that, the fact that qualified nurses administer the deworming tablets with assistance from final year nursing students boosted the public confidence in the national exercise.

Dr Cornelia Atsyor commended the Government of Eswatini for successfully conducting the deworming exercise, adding that the high coverage witnessed over the years will eventually translate positively towards eliminating Schistosomiasis and Soil Transmitted Helminthiasis as public health problems in the country. She also commended the collaborative efforts from the different sectors of government, the United Nations family, other development partners, parents and guardians, the media and the learners to ensure the achievement of the Sustainable Development Goal 3 on health and wellbeing. Eswatini free of Neglected Tropical Diseases is possible.

Download logo
The Minister of Health launching the campaign (1)