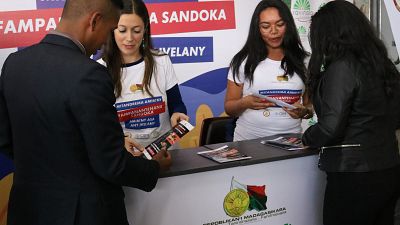 “Now that I am back home, I will be able to start my life again,” states a Malagasy woman upon her repatriation to the capital of the island nation of Madagascar, which lies off southeastern Africa. She is one of the many victims of trafficking assisted by IOM in the recent months’ upsurge in repatriation cases.

In the first six months of the year, a record number of more than 200 women victims of trafficking have been assisted to return to Madagascar. They all share a feeling of hope for what their life will be from now on.

Unfortunately, there are many whose future looks dark still. Trafficking in persons remains a significant challenge for the country. According to IOM and its partners’ research, women are particularly vulnerable and subjected to sex trafficking and forced labour in the domestic sector within the country, as well as beyond its borders.

With support from IOM, the event was held in the main hall of the Antananarivo International Airport, managed by Ravinala Airports S.A. – a consortium made up of Meridiam, Aéroports de Paris (ADP), Bouygues Bâtiment International (BBI) and Colas – which develops and manages the airports of Antananarivo and Nosy Be under concession.

Travellers and passers-by were given the opportunity to exchange views with IOM and BNLTEH staffers on Trafficking in Persons in Madagascar, and to view a short, animated video clip on the risks associated with unsafe international migration for the purpose of labour. The development of the awareness-raising campaign materials and the event at the airport were funded by Ravinala Airports S.A.

In comments to the press on the margin of the awareness-raising event, IOM Madagascar Chief of Mission Daniel Silva y Poveda noted that “Today’s initiative is an excellent illustration of the commitment of private sector stakeholders in the fight against Trafficking in Persons. Counter-trafficking is not a sole responsibility of Governments. Counter-trafficking is a responsibility of the whole society. We thank Ravinala Airports S.A. for breaking ground on this type of engagement in Madagascar and to lead by example.”

For his part, Nicolas Deviller, Deputy CEO from Ravinala Airports S.A., emphasized that “Airports are the main gateway for people who want to go to/or leave Madagascar. Fighting against trafficking in persons cannot be done alone by Ravinala Airports. We have to work with IOM, Government and the BNLTEH to save lives.” Felana Ratsimbazafy, Quality, Health, Safety, Social and Environment Director at Ravinala Airports added that “Financing this campaign can prevent unsafe migration and help victims of this crime to seek assistance. They are not alone.”

IOM works in partnership with governments, other United Nations agencies, international and non-governmental organizations, the private sector and development partners on all aspects of counter-trafficking responses – prevention, protection, and prosecution. Since the mid-1990s, IOM and its partners have provided protection and assistance to close to 100,000 men, women and children, who were trafficked for sexual and labour exploitation, slavery or practices similar to slavery, servitude, or for organ removal.