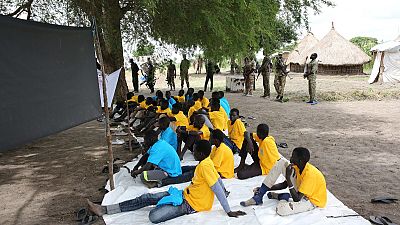 To paraphrase a famous man on the moon: this day marked a small step for South Sudan but a giant leap for 32 boys in MirMir in the country’s northern Unity region.

Trading in their weapons and uniforms for backpacks filled with essentials, they have bid farewell to their precocious military lives and are ready to take their first stumbling steps on the long road towards a full return to civilian life.

“For us, this is another way of bringing the [revitalized peace] agreement to the ground. This is an example of UNMISS protecting civilians and disseminating [the content] of the peace deal by means of releasing children having served with armed forces,” said Alfred Orono Orono, head of the Child Protection Unit of the United Nations Mission in South Sudan.

Most of the now ex-combatants are aged between 12 and 16, but in truth they are already veterans. They have served, in different capacities, with the armed forces loyal to opposition leader Riek Machar since 2014.

Releasing children from armed groups is hard and patience-demanding work. The process leading up to this day’s official ceremony started some three months ago, and has involved the cooperation between multiple stakeholders.

Mr. Orono Orono names the National Disarmament, Demobilization and Reintegration Committee and the United Nations Children’s Fund, Uniecef, as key partners, alongside the child protection focal points within government and opposition forces, as well as the South Sudan Opposition Alliance.

While the logistics, negotiations and leg work needed to extract boys and girls from armed groups are all difficult tasks, they are dwarfed by the challenge coming up next: successfully reintegrating the children with their home communities and civilian life in general.

“The work of Unicef starts now, as the [release] ceremony ends. We are working with the home communities [of the boys] to make sure that there is acceptance [of their return], which is key for us. Hopefully they will also be reinserted into the school cycle as soon as possible as well,” says Unicef Child Protection Specialist Federica Pentaleoni.

Since the outbreak of the conflict in December 2013, some 3,000 children serving with armed forces have been returned to civilian life. Several thousands of South Sudanese boys and girls still serve in some military context or other, and experience shows that some of the children that have been released go back to their respective armed groups.

“There are several reasons for this. There are financial motives, a lack of education and other factors involved,” Ms. Pentaleoni explains. “What we can do to prevent this is to follow up and make sure every single child receives the services that they need, and that their communities are listening to them and are truly willing to accept them back.”

Reclaiming their future is no walk in the park for anybody involved. Former ex-combatants are not only lagging behind in terms of education but are also frequently stigmatized by their home communities, and for parents to reunite with their long-lost sons and daughters can be an overwhelming experience.

“Everyone [the families of the boys being released] was actually crying over the phone when we called them. Most of them, they told us they were not certain they would see their children again. There was lots of emotion and definitely they are waiting for them to go back,” says Ms. Pentaleoni.

More such emotional turmoil is to be expected, according to Alfred Orono Orono. He explains that the UN peacekeeping mission, Unicef, politicians, military commanders and the National Disarmament, Demobilization and Reintegration Committee will continue to go around the country to return armed children to a civilian context, preferably a peaceful one.

“Let’s work together and take advantage of the peace [following the signing of last year’s revitalized peace agreement]. I ask all of you to maintain it. All of you are sitting here together. Why do you need to fight? When you fight, there is no development. When you fight, children don’t go to school. But when there is peace you have all these things,” Mr. Orono Orono said in a passionate plea to those in attendance.

Liech County Commissioner Nhid Kam Both echoed those sentiments, expressing his hopes for the released boys “to go home, build their tukuls and stay with their mothers”, as peace has come.

From peace, Commissioner Both moved on to another greater good.

Download logo
On 23 July, after serving with opposition forces since 2014, 32 boys were released in MirMir in the Unity region. They will now return to civilian life.