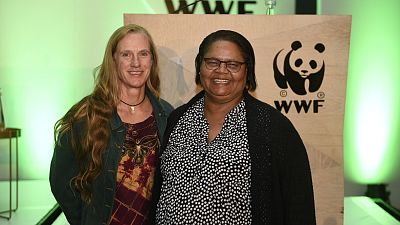 Two women who are the powerhouse behind a non-profit, social enterprise organisation, Environmental and Rural Solutions, based in Matatiele in the Eastern Cape have been named the winners of WWF South Africa’s Living Planet Award for 2019.

Sissie Matela and Nicky McLeod were named the winners of this prestigious environmental award at WWF’s Annual Living Planet Conference which is taking place in Pretoria today. The award recognises exceptional South Africans who inspire people to live in harmony with nature for the benefit of our country and the wellbeing of all.

This year’s conference is delving into South Africa’s food system and the challenges that lie ahead as we grapple with over and under nutrition and the environmental degradation and climate impact of food production and consumption. Among the participants are celebrity chef Zola Nene, agricultural economist Wandile Sihlobe and the director of the Southern African Food Lab Scott Drimie.

Introducing the award winners, CEO of WWF South Africa Dr Morné du Plessis, said: “Today we honour two women who had a vision 10 years ago, for both people and nature; a vision to engage multiple partners and many local communities while addressing diverse yet inter-connected social and environmental needs.

“Over the last decade, the ERS has convened and led the Umzimvubu Catchment Partnership Programme which brings together 35 organisations to govern the landscape and the water resources in the area. It is here that the vision and passion of these two remarkable woman has created one of South Africa’s most innovative and collaborative approaches and catchment management models.”

The Umzimvubu River and its surrounds is home to some 20% of the Eastern Cape’s population (1.4 million people) and is one of South Africa’s few remaining near natural river systems. With 70% of the land under communal ownership, those who live along its course are highly dependent on the river system for water, grazing, household materials and local food security.

Upon hearing the news of the award, the duo responded: “This is such an honour for us and our little enterprise! We have been plodding along, hoping that we are changing lives and hopefully the grass is growing green and the water is getting clearer. Recognition like this is so motivating and we want to do more. Our progress has not been just due to our own work but also our entire team and the fantastic partners we work with. As the saying goes, a ship cannot sail without the crew!”

For more on the Living Planet Conference or to livestream proceedings go to: https://www.wwf.org.za/lpc.cfm

More about the winners:

Lipalesa Sissie Matela (Director, ERS): With more than 20 years of hands-on experience, Sissie Matela is a soil scientist by training with a Masters in Agronomy and Soil Science. She has worked as a field soil scientist, university lecturer, researcher, trainer and director of ERS. She co-ordinated a development project in Lesotho and has worked for organisations such as the CSIR, IUCN, the World Bank and the Food and Agricultural Organisation.

Nicky McLeod (Director and Manager, ERS) has worked extensively in rural areas on development initiatives including soil conservation, low-input vegetable production as well as water supply and sanitation. With an Honours in Environmental Science and a diploma in environmental education and permaculture, she has 14 years of hands-on experience. Her skills range from conducting feasibility assessments and drawing up business plans to managing projects and facilitating community workshops. Nicky has also made inputs into policy debates that have led to the formalising of environmental laws in SA.