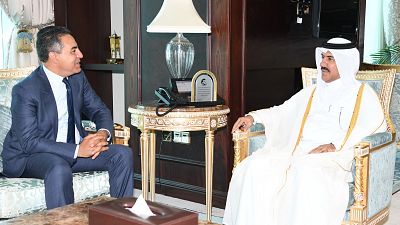 HE Secretary General of the Ministry of Foreign Affairs Dr. Ahmed bin Hassan Al Hammadi received Tuesday a copy of the credentials of HE Ambassador of the Kingdom of Morocco to the State Mohamed Setri.

HE the Secretary General of the Ministry of Foreign Affairs wished HE the new Ambassador success in his duties, assuring him to get all support for the promotion of bilateral relations to a closer cooperation in various fields.

Distributed by APO Group on behalf of Ministry of Foreign Affairs of The State of Qatar.
Media files