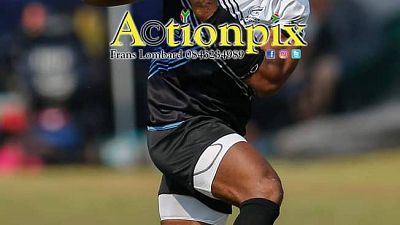 As Zambia readies to face Kenya in the ongoing Victoria Cup games on Saturday 27th July, 2019, one of the players to watch is Edward Mumba aka “Yellow Shadow”.

Yellow started his playing career at Lusaka Rugby Club in 2006 and featured in the game against Mufulira Leopards Rugby Club. He made his International debut in 2007 at the u18 Cottco Games in Harare, Zimbabwe, represented Zambia 7s at the 2008 Castle 7s in Lusaka, played for the u21 in Zimbabwe 2011 and later jogged out with the senior National 15s Team in 2012.

His favorite position in Outside Centre or Winger while his favorite player/role model is former New Zealand All Blacks Captain Richie McCaw. He explains that his best moments up to now are; playing against the All Blacks at the 2018 Gold Coast games in Australia, beating Germany in the Safland 7s held Namibia and most importantly marrying the love of his life and biggest supporter Victoria Musukwa.

Edward (who is a former bodybuilder at Matero Gym attributes his love for rugby to former Lusaka Rugby Club players Maluba, Norman Nkandu and Coach Joshua Lungu. He pays tribute to the named individuals as having played a pivotal role in him taking up rugby as a full time sport at Red Arrows Rugby Club in Lusaka since 2010.

As the Victoria Cup progresses, he hopes Team Zambia will manage to cement/upgrade its position among the Top 10 ranked teams in Africa Rugby. His advice to upcoming players is, “Train hard, be disciplined, stay focused, respect elders and always keep your body in check by staying fit at all times”

Come on Saturday 27th July, 2019 at Diggers Rugby Club in Kitwe and watch Yellow and Team Zambia as they take on Kenya Rugby in the Victoria Cup Tournament 2019.