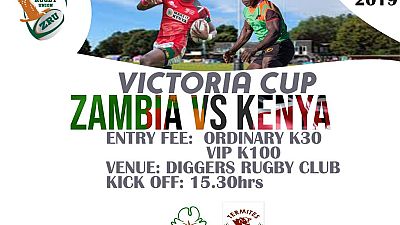 As Zambia intensifies preparations for the upcoming Victoria Cup game against Kenya on Saturday 27th July at Diggers Rugby Club in Kitwe, we introduce you to the “Russian Bear” who has been let loose on the International rugby scene.

Vincent Sonny Nkole started his rugby career in 2008 at Mufulira High School. Being a talented student he played both Volleyball and Rugby for the Inter-Provincial Schools Team. After some persuasion from former Zambia International players Hopeman Kanamina and Bresford Chipanta, he hesitantly joined Mufulira Leopards Rugby Club and made his debut in 2011 in a tough game against current Zambia Rugby league champions Red Arrows in Lusaka.

In the year 2013 he relocated to Lusaka where he offered his services at Green Buffaloes Rugby Club on a two year deal. By end of 2014, Red Arrows had seen his potential and successfully signed him on a long term deal which has seen him stay at the club since then.

Vincent announced his International appearance in 2012 at the u19 Cottco (now Dairiboard) Tournament held at Prince Edward College in Harare, Zimbabwe. In 2015 he made his 7s National Team debut at the Kigali 7s held in Rwanda which Team Zambia successfully won.

The Russian Bear explains that some highlights of his 10 year career include defending the 2019 local league championship in a game played against rivals Mufulira Leopards Rugby, winning the 2018 Zambia International 7s Tournament.

Vincent, whose favorite rugby position is lock, has a few words of advice to upcoming rugby players. “Rugby is a gentleman's game, it's a thinking game, believe in yourself and your capabilities, develop interest, passion and always seek knowledge from those who have come ahead of you”

The bear will be in action this weekend, come and support Team Zambia. Kick off is at 14:00 and the venue is Diggers Rugby Club in Kitwe, Zambia.