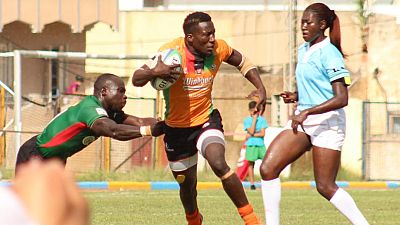 The small border town of Chililabombwe in the Copperbelt Province of Zambia has continued producing some of Zambia's celebrated sporting personalities.

One such sportsman is Laston Mukosa aka “1HZ”, a title which came about after seeing how resilient a small boy could withstand and endure a game predominantly played by people much older than him. Laston was introduced to the game in 2006 by his elder brothers Peter Mukosa, Chanda Mukosa and former Zambia Rugby player Katai Mukosa who all played for Konkola Rugby Club.

Laston, whose role model is Mufulira Leopards/Zambia Rugby player Martin Chisanga, says he enjoys playing as a FlyHalf because it gives him an opportunity to exploit the opponents with his well calculated manoeuvres. He hopes to see Zambia progress in the ongoing 2019 Victoria Cup games by making full use of all opportunities available on the field of play.

As a seasoned sportsman, he has a few wise words for those aspiring to get to the highest point in their rugby careers. “Discipline, passion, hard work and dedication towards the game are cardinal aspects required for success”

Watch Laston Mukosa this weekend as he features for Zambia as they take on Kenya at Diggers Rugby Club in Kitwe.