Africa Cup of Nations (AFCON) 2019 gets Africa talking on Facebook 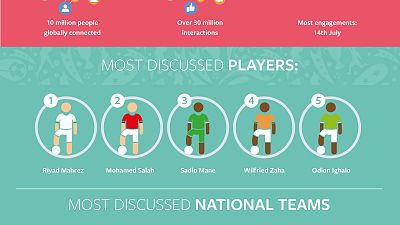 Friday, July 19, 2019, marked the end of the 2019 Africa Cup of Nations (AFCON), a spectacular tournament that had people glued to their screens for the month of its duration. Africa moved to the rhythm of AFCON 2019, with more than 10 million people choosing Facebook (www.Facebook.com) to share their passion and excitement.

People across barriers of nation, language, class and culture took to Facebook to discuss the AFCON 2019. Based on data measured between June 21st when AFCON started and July 16th:

Facebook measured Facebook conversation including posts, comments, shares, likes and reactions related to the tournament. All data was aggregated and de-personalised. Conversations were identified based on keywords and combinations of keywords that were associated with discussions around AFCON 2019.

Distributed by APO Group on behalf of Facebook.
Media files