The Black Diamond of Zambian Rugby 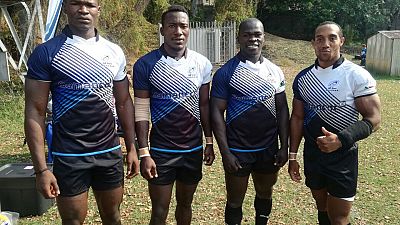 Israel Kalumba is a Red Arrows Rugby player who started his rugby career at Nchanga Rugby Club in the year 2007 in the developmental side under Coach Hugo Chisenga, Patrick Musonda and Chiluba Kangwa. His interest in rugby developed after watching an International Rugby match between Zambia vs Cameroon played in Chingola in 2003.

His stay in the B team was short lived as he featured for the senior team a year later in the game against Diggers Rugby Club in Kitwe. His stamina and hunger for the ball caught the attention of Lusaka Powerhouse Rugby Club who got him on along transfer deal which saw him play there for 5 years.

He was part of the under 19 team that played Zimbabwe in 2011 and made his senior National Team debut in the 2012 Confederation of African Rugby (CAR) qualifiers in Gaborone, Botswana.

Some of this favourite moments so far include playing against the All Blacks 7s at the 2018 Gold Coast Games in Australia, being appointed Captain of the Zambia 7s National Team, playing for SA All Stars Academy at the 2018 Dubai 7s, Winning the 2019 Rugby League and more importantly, marrying the love of his life Milambo Lewanika.

Israel, whose role model is Sonny Bill Williams of the All Blacks, believes nothing good comes easy. “I always put in my best in everything I do, my Coaches & teammates expect the best out of me and I strive not to disappoint myself and those around me”. He adds that he is lucky and blessed to be able to play for a team of hard workers at Red Arrows Rugby.

His advice to upcoming rugby players is simple ; Discipline and hard work will open doors of opportunities that would otherwise remain closed. Rugby is a team sport, regardless of how talented you are, you still need your team mate for you to succeed.

Kalumba is part of the Zambia Rugby National Team currently in camp for the upcoming Victoria Cup game against Kenya set for Diggers Rugby Club in Kitwe on Saturday 27th July, 2019.