30 Chadian Journalists Trained This Month, Topping 600 Trainees in West and Central Africa Since 2018

This month (10-11/07), 30 Chadian journalists gathered for a workshop on migration organized by the International Organization for Migration (IOM) in N’Djamena, Chad’s capital.

Through the Maison des Médias du Tchad (House of Chadian Media), an IOM partner, these reporters and their staff requested training to provide participants with the necessary terminological and legal tools to cover migration in an informed way. Many also requested training in learning how to distinguish between types of migrants, especially those with vulnerabilities.

Since 2018, nearly 600 journalists participated in the workshops, across West and Central Africa – including 51 journalists and 44 student-journalists in the Gambia alone.

These workshops were funded by the EU-IOM Joint Initiative for Migrant Protection and Reintegration.

“The idea is to raise awareness and ask simple questions: asking participants who of their parents were born in Chad or who studied abroad. Thus, the journalists realize that reporting on migration is not just about deaths in the Mediterranean,” explained Anne Kathrin Schaefer, IOM Chief of Mission in Chad.

In the West and Central Africa region, in July alone, IOM also organized training workshops for journalists in Banjul, Gambia (4-5 July), which brought together 25 journalists from the country, including two former beneficiaries of the Assisted Voluntary Return Programme. In Yaoundé, Cameroon, IOM arranged a session for 20 journalists from 3-4 July.

“The word ‘migrant’ has been so abused in the media that I felt embarrassed any time I heard it. For me, it referred to the African with frizzy hair, hungry and thirsty, sold into slavery,” said Chadian blogger Moukhtar Ben Ali, one of the participants in the training. “But even in Chad, since its independence, our government is yet made up of migrants.

“Why do we insist on talking about irregular migration, when it represents only 10 percent of the world’s movements? And why do we only describe ‘migration’ as being an African issue, when the African continent is the fourth ‘supplier’ of international migrants? This is not fair,” he concluded.

Chadian photographer Abdoulaye Barry also participated in the training to stress the significance of media images and the importance of enhancing photojournalism in the country: “We should go beyond the simple fact of producing images of migration. We should give this phenomenon a soul, and that’s what makes photography splendid,” he said.

IOM in Chad is also preparing to launch the Beyond the Headlines campaign, which aims to train young graduates on photography and journalism so that they can cover the migration phenomenon in Chad in a different way.

As migration continues to be frequently covered in the media, particularly through the prism of deaths in the Mediterranean or in the desert, the diversity of migration is rarely reflected in news articles. Beyond the Headlines is an initiative that gives all migrants in Chad the opportunity to share their stories and put a human face on the complexity of the phenomenon.

“A thorough review of Gambian current issues revealed many gaps in media coverage of migration and related issues; these gaps pertain to the use of terminology and ethical issues. Training was the first step forward to close the gaps, and equipped journalists with skills to better report on migration in a wider regional context,” said Lamin Jahateh, Programme Manager at Gambian Press Union.

“Far from being a marketing campaign, this training will enable journalists in Cameroon to produce news angles,” said Emmanuel Jules Ntap of Voice of America, also participating in the training.

Participants also interviewed Sudanese and Central African refugees awaiting resettlement in countries such as France and were trained on interview techniques for vulnerable persons such as victims of trafficking. 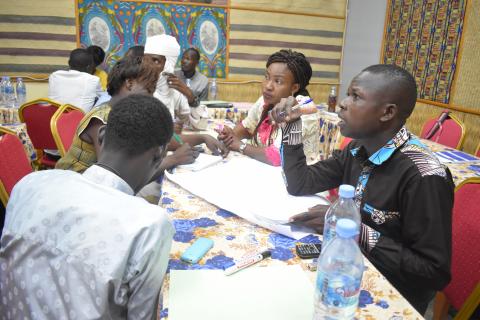