A new report released today at the 10th IAS Conference on HIV Science in Mexico City, Mexico, shows that the world is lagging behind in its commitment to end the AIDS epidemic among children and adolescents. The report, Start Free, Stay Free, AIDS Free, shows that the pace of progress in reducing new HIV infections among children and expanding access to treatment for children, adolescents and pregnant women living with HIV has slowed significantly and that global targets set for 2018 have been missed, despite important gains being made in some countries.

“The failure to reach the 2018 targets to reduce new HIV infections among children and adolescents and to widen access to life-saving treatment is both disappointing and frustrating,” said Gunilla Carlsson, UNAIDS Executive Director, a.i. “We need to act quickly to turn this situation around and honour the commitment to end the AIDS epidemic for the next generation.”

Around 82% of pregnant women living with HIV now have access to antiretroviral medicines. There has been considerable progress among countries in eastern and southern Africa, with more than 90% of pregnant women accessing antiretroviral medicines in Ethiopia, Kenya, Uganda, United Republic of Tanzania and Zimbabwe and 95% or higher in Botswana, Malawi, Mozambique, Namibia and Zambia. This has resulted in a 41% reduction in new HIV infections among children, with remarkable reductions achieved in Botswana (85%), Rwanda (83%), Malawi (76%), Namibia (71%), Zimbabwe (69%) and Uganda (65%) since 2010. The progress made by these countries shows what can be achieved through strong political leadership, rapid policy adoption and concerted efforts by all stakeholders.

“These new data show that many countries have made important progress toward reaching the 2020 targets, and yet others are lagging significantly behind,” said Deborah Birx, United States Global AIDS Coordinator and Special Representative for Global Health Diplomacy. “These stark disparities highlight the critical role of political commitment, rapid policy implementation and data-driven investments in accelerating impact.”

“Ending AIDS and achieving universal health coverage means leaving no one behind. Yet, too many children and adolescents with HIV are still missing out on the chance to grow up in full health as they can’t access treatment,” said Ren Minghui, the World Health Organization’s Assistant Director-General for Universal Health Coverage/Communicable and Noncommunicable Diseases. “We need to intensify our efforts to and keep our promise to these children.”

Children living with HIV are also being left behind in HIV treatment scale-up and are not being diagnosed and treated early enough. An estimated 940000 children aged 0–14 years were accessing treatment in 2018, double the number that were on treatment in 2010 but far short of the target of 1.6 million set for 2018.

Children living with HIV are still less likely to have access to HIV treatment than adults living with HIV, a disparity that is widening in some countries, especially in western and central Africa. As a result, the AIDS epidemic is still claiming the lives of many children aged 0–14 years. Children in this age group comprised 5% of all people living with HIV in 23 focus countries but accounted for 15% of people who died from AIDS-related illnesses in those countries in 2018.

“We know how to prevent children from contracting HIV, and we know how to prevent the onset of AIDS in children if they do become infected. They need to be tested and linked to care and treatment as a matter of urgency, but we are missing these opportunities,” said Henrietta Fore, Executive Director of the United Nations Children’s Fund. “Knowing what to do is not enough. We must come together and act with renewed commitment to children and adolescents living with HIV and give them the best chance to survive and thrive.”

For optimal outcomes, children who become infected with HIV must access treatment as quickly as possible. However, in 2018, only 63% of the 1.1 million infants exposed to HIV in the 23 countries worst affected by the epidemic were tested for HIV by the age of two months.

“In many ways, we as a community have settled for a substandard quality of care for children living with HIV,” said Chip Lyons, President and Chief Executive Officer, Elizabeth Glaser Pediatric AIDS Foundation, “We must not allow children to perpetually receive less than the basic standard of care we demand for adults. Especially when the ultimate consequence of that approach is that children and young people are dying of HIV at disproportionally and unacceptably high rates.”

The root factors driving the vulnerability of young women and girls to HIV infection are social, structural and behavioural and must be addressed in order to achieve sustainable prevention outcomes. Gender discrimination, gender-based violence, restricted access to opportunities and a lack of tailored services all compound their vulnerability to HIV. Effective responses prioritize an approach combining access to HIV and sexual and reproductive health services with social, structural and behavioural programmes.

“The disparity in viral load suppression rates among adolescents with HIV compared to adults is unacceptable and behoves the global community to advocate for more robust, potent antiretroviral therapy regimens for adolescents as well as to hasten efforts to prevent new infections in this critically vulnerable population,” said Fatima Tsiouris, Deputy Director of the Clinical and Training Unit and Prevention of Mother-to-Child Transmission Lead at ICAP, Columbia University.

UNAIDS and the United States President’s Emergency Plan for AIDS Relief launched the Start Free, Stay Free, AIDS Free framework in 2016 to build on the achievements of the Global Plan towards the elimination of new HIV infections among children by 2015 and keeping their mothers alive, which ended in 2014. 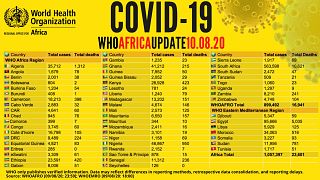