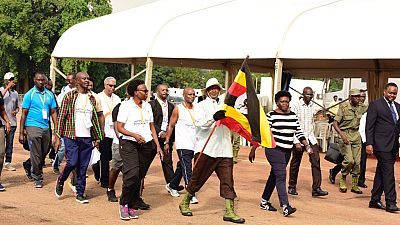 Uganda recently held the 2nd National Day of Physical Activity under the theme ‘My Health, My Responsibility’. The Guest of Honour, His Excellency President Yoweri Kaguta Museveni called on all Ugandans to take responsibility for their health by adopting healthy lifestyles.

The government of Uganda endorsed this day to be an annual event every 2nd Sunday of July. The day compliments other efforts to prevent and control the rising epidemic of Non-Communicable Diseases (NCDs). It also provides an opportunity to sensitize the public on the importance of physical activity in the prevention of NCDs.

While officiating at the event, President Museveni further informed the masses that the only way to live a long life is to eat healthily and exercise. He highlighted the growing threat of NCDs in the country, “Ugandans are increasingly enjoying unhealthy lifestyles, but this is detrimental to the growth of the nation.”

He further decried alcohol and drug abuse, “desist from taking drugs and alcohol because of the health-related issues these bring to the body. I'm 74 years old with no blood pressure or diabetes.”

President Museveni also launched the Presidential Initiative on Healthy Lifestyle that intends to; Promote healthy eating and lifestyle practices in households and communities; Raise public awareness about malnutrition and its consequences; and Advocate for engagement and involvement of public and private sectors, civil society and other stakeholders in promoting healthy diets and lifestyles.

The Minister of Health, Dr Jane Ruth Aceng reechoed the President’s message calling on Ugandans to value their health. She said, “the commemoration of this day is symbolic for the importance of physical activity- however, regular exercise should be part and parcel of your daily routine.”

The World Health Organization (WHO) Country Representative, Dr Yonas Tegegn Woldemariam noted that NCDs are a growing public health problem. “To tackle them, looking into treatment won’t be the solution, it’s not financially sustainable. The best way is to prevent them,” he said.

Dr Yonas further urged the public to change their lifestyles saying, “be moderate with alcohol, stop taking tobacco and decrease consumption of foods with high sugar. Physical activity will not only prevent NCDs but increase productivity,” he stressed.

Dr Yonas also applauded President Museveni for recognizing NCDs as a national priority. “Uganda has set a very important and high standard globally by taking physical activity as a national event,” he said.

Globally, NCDs including strokes, most heart diseases, most cancers, diabetes, chronic kidney disease, cataracts, osteoarthritis, osteoporosis, among others account for 68% of death. 80% of these deaths occur in low- and middle-income countries including Uganda.

In Uganda, according to the Uganda NCD Survey, NCDs account for 40% of deaths and the trend is increasing. 1 in every 4 adults has high blood pressure, 3 among 4 of those with high blood pressure do not know that they have it. In addition, 4,690 people died of diabetes in 2016 while 2 in 100 Ugandan adults have diabetes. In 2018, 21,829 people died of cancer while 32, 617 new cancer cases occurred in the same year.