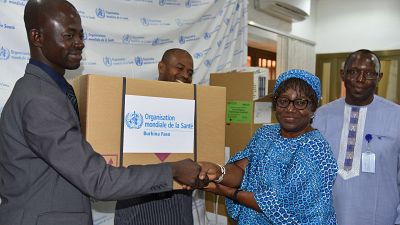 The World Health Organization (WHO) is scaling up operations in Burkina Faso in response to a growing humanitarian crisis, which has seen over 200,000 displaced. WHO is mobilizing experts to strengthen interventions, including preventative and responsive vaccination campaigns and strategies for provision of health services, as well as increasing supplies of medicines and medical equipment.

Violence and inter-communal conflicts which have plagued the country increasingly since 2015, reached an unprecedented level in the first half of 2019. This has led to a sharp deterioration in the humanitarian situation. As of 10 July 2019 according to the United Nations Office for the Coordination of Humanitarian Affairs (OCHA), the number of internally displaced persons (IDPs) is estimated at 219,756. Of the displaced, 41% are children while 43.3% are women.

Almost 25000 Malians have also sought refuge in Burkina Faso, according to the Office of the United Nations High Commissioner for Refugees (UNHCR). Ninety-eight percent of these are being hosted in the Sahel region of Burkina Faso, which borders Mali and Niger and is one of the country’s most affected regions.

This situation has serious consequences for the health sector. The closure or limited functioning of a large number of health facilities has left around 400000 persons without health care. Health facilities are also struggling to cope with the large influx of displaced persons.

“In response to the worsening humanitarian situation we are stepping up our operations,” said WHO Regional Director for Africa Dr Matshidiso Moeti, “this is in order to strengthen the country’s capacity to respond to the crisis, and growing health care challenges.”

Following needs assessments carried out in January and June, WHO has provided the Ministry of Health with emergency health equipment and medicine kits, including trauma kits and dispensary tents, and provided funding for vaccination campaigns against measles, rubella and meningitis in the most affected regions.

In addition, WHO funds will be allocated to health promotion and logistics in these areas, as well as to the deployment of health workers providing care to internally displaced people.

WHO will also contribute to strengthen epidemiological surveillance in order to ensure the early detection of epidemics and other public health threats, among both the internally displaced population and host communities.

Download logo
The Chief of Staff at the Ministry of Health, Mr Emmanuel SORGHO, receiving one of the emergency kits from WHO Representative in Burkina Faso, Dr. Alimata J. DIARRA-NAMA