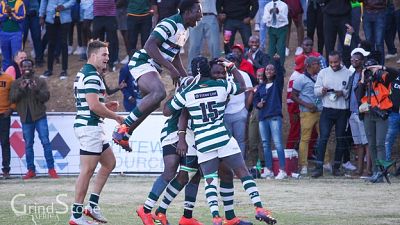 Zimbabwe Sables opened their Victoria Cup campaign with a convincing 39-10 victory over Zambia in front of a packed Machinery Exchange Stadium at Harare Sports Club.

By half time  Zimbabwe led  15-3  after Daniel Mango and Daniel Capsopoulos dotted a try each, Mangongo had the bigger smile scoring on his debut.

Zambia made two attempts before scoring off a penalty within range, the Sables had built a fortress defense which proved too colossal for the visitors to permeate.

Capsopoulos made it a brace of tries in the second half as did debutant Takudzwa Chieza who scored two blistering tries much to the amusement of the home crowd.

Zambian Coach Lawrence Njovu said they expected a very tough encounter and the result was no surprise.

“We knew Zimbabwe will come hard at us, we beat them last year and we knew they will be coming back for us.

“We came with 70% of a new team and we had a few hiccups as we had injuries from our league final last week. Twelve of our players were injured and we had to pick boys from our under-20s, but we cannot take away anything from Zimbabwe.”

This is a good result for Zimbabwe, one which head Coach Brendan Dawson would have liked to be more clinical especially as Zimbabwe faces Uganda in two weeks.

“The score line is a nice win but I don’t believe we performed as well as I wanted, I don’t think we were accurate enough. We did not protect our ball enough.

“We had some good scummaging and some good line-outs everything was good but we were not clinical and we lost too much ball possession.

“Our penalty count was ridiculous – we cannot afford to play the top-level sides and win like that,” said Dawson.

Meanwhile Zambia Women broke the hearts of Zimbabwe Women’s national team beating them 19-18 having come from a 13-5 deficit at half time.

Churchill Bulldogs were brought to a grinding halt in a 10-10 stalemate against St Georges College in a hair raising school boy derby.