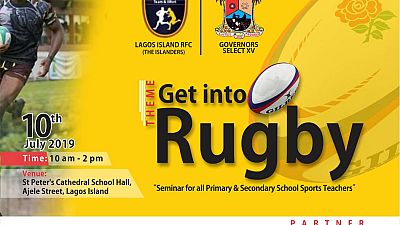 The much-awaited seminar on rugby for primary and secondary school teachers in Lagos Island tagged ‘Get Into Rugby’ lived up to the billings as the participants exuded so much enthusiasm over the seminar.

The event organized by the Lagos Island Rugby Football Club and sponsored by Hon. Larinde Williams, as part of its Corporate Social Responsibility initiatives, was in conjunction with Lagos State Rugby Association, was held at the Christ Church Cathedral School Hall, Broad St, Lagos Island, Wednesday.

Speaking with the press during the event, the Lagos State Rugby boss, Akintola, said his body would continue to collaborate with the organizers in order to make it better appreciated in the state.

On his part, the founder of the newly formed Lagos Island Rugby Football Club and initiator of the event, Hon. Larinde Williams promised that such a seminar would be a continuous one and with coaches being assigned to schools to train the teachers and the kids.

“We want to follow the success template in countries like England and South Africa, where the sport is introduced to the kids from the ages of 5-6. And we shall see how we can provide these schools with technical support at all times,” the former national basketball and hockey star stated.

Mayegun, on his part, promised that the Lagos Island LGEA is willing to continue its partnership with the organizers to make rugby popular and accepted at the grassroots level and in schools.

The seminar is a prelude to the major event slated for next month, August. It is a twin event to officially launch the newly formed Lagos Island Rugby Football Club, as well as, the Governor’s Cup to commemorate the inauguration of Lagos State Governor, Babajide Sanwo-Olu.