On 3 July, more than 50 migrants and refugees lost their lives in an airstrike on the Tajoura Detention Centre in the east of Libya’s capital Tripoli. This week we appealed to the European Union and African Union to prevent such a tragedy from being repeated. The international community should consider the protection of the human rights of migrants and refugees a core element of its engagement in Libya.

As a priority, we ask that 5,600 refugees and migrants currently held in centres across Libya be freed in an orderly manner and their protection guaranteed or that they be evacuated to other countries from where accelerated resettlement is needed. For this, countries must step forward with more evacuation and resettlement places. In addition, migrants wishing to return to their countries of origin should continue to be able to do so. Extra resources are equally essential.

Detention of those disembarked in Libya after being rescued at sea has to stop. Practical alternatives exist: people should be allowed to live in the community or in open centres and corresponding registration duties should be established. Semi-open safe centres can be established similar to UNHCR’s Gathering and Departure Facility.

Some 400 attack survivors have been moved to the Gathering and Departure Facility. That centre is now badly overcrowded and work is ongoing to secure the evacuation of these people, particularly the most vulnerable, from Libya. However, many other refugees and migrants remain in detention elsewhere in Libya where suffering and risk of human rights abuses continue. A safe, managed process of release, with proper information on available assistance, is essential for all.

For the approximately 50,000 registered refugees and asylum-seekers currently living elsewhere in Libya, as well as for the estimated 800,000 migrants, more help is required so that living conditions are improved, human rights are better protected, and fewer people end up being driven into the hands of smugglers and human traffickers.

Every effort should be taken to prevent people rescued on the Mediterranean from being disembarked in Libya, which cannot be considered a safe port. In the past European State vessels conducting search and rescue operations saved thousands of lives, including through disembarkations in safe ports. They should resume this vital work and temporary disembarkation schemes should urgently be established to share responsibilities within Europe. NGO boats have played a similarly crucial role on the Mediterranean and must not be penalized for saving lives at sea. Commercial vessels must not be directed to bring rescued passengers back to Libya.

Any assistance and responsibilities assigned to relevant Libyan entities should be made conditional on no one being arbitrarily detained after they have been rescued and guarantees of human rights standards being upheld. Without such guarantees, support should be halted.

Another tragedy like Tajoura cannot be allowed to happen again. The protection of human lives must be the overriding priority. 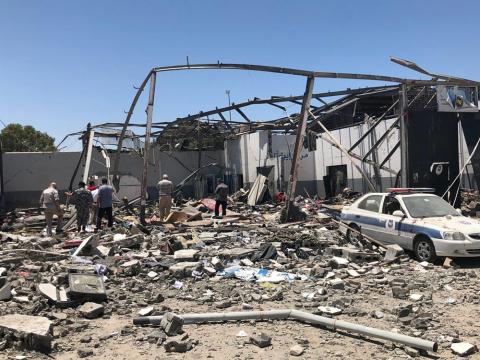